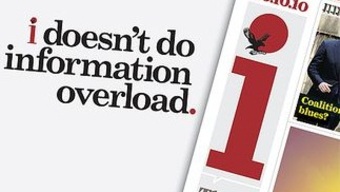 Next week The Independent launches a new ultra-cheap condensed newspaper called i.

It's the first launch of a serious newspaper in the UK since...well, The Independent launched in the 80s. It will sell for 20p - with a heftier £1 digest edition on Fridays - and aims to cover the serious news in a concise manner.

Given the abysmal state of the broadsheets in this country, I can't help but be a little bit excited by this. The Times, the Guardian, the Independent itself and increasingly the Daily Telegraph are full of the same PR puff showbiz, fashion and gossip nonsense as the tabloids. They've become reliant on quasi-celebrity columnists to such an extent that reporting the news is coming a very poor second or third to the obnoxious counter-intuitive opinions of semi-educated no-marks.

This isn't snobbery: a robust free press is essential to the functioning of a democratic society. You can't, of course, force people to inform themselves. But there must at least be an opportunity.

The British press has increasingly become unfit for purpose. Television and radio can only report a very few stories and then in little detail. The web has the capacity to inform and educate: in practice it overwhelms us with information, the relevant and the trivial, without adequate quality controls.

The newspaper publishing trade has been stifled by pessimism for years. Print is dead, we're told. Circulations are plummeting. All true, but I think that it's not just competition from other media. I stopped buying newspapers regularly a few years ago. To some extent it was because I could read them online. But mostly I resented paying for pages and pages of fatuous nonsense: PR-led stories that originated in spurious poll or surveys, articles about fashion, pop, film, sport or TV, acres of lifestyle coverage.

I've never felt any less in touch with the world. Once a week I read The Economist cover to cover. On other days I skim through the New York Times, the Washington Post and the Chicago Tribune online, because in the US they still produce serious newspapers. I sometimes get The Mirror, because their sport coverage is still second to none. Occasionally I buy The Guardian or The Times, but usually feel that I have just wasted my money. On the last occasion I bought a Sunday paper, I stood outside the newsagent stuffing the bin with the sport, business, money, personal finance, travel, fashion, style, colour magazine and what's on sections. Unfortunately the remaining News and News Review sections seem to have been filled with much the same verbal polystyrene as the bits I chucked.

If it can give us a low-cost but substantial read, I think that i will find a ready market of disgruntled readers who are sick of being patronised by the marketing-led puff candy being pedalled as newspapers.