How to save alienated families from themselves - by cutting their benefits! 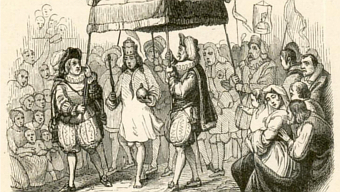 Having proceeded from Hug a Hoody to righteous smiter of 'slow motion moral collapse' (which makes absolutely no sense at all if you take time to think about it), the Prime Minister has now moved on to his 'drag them to the nearest cashpoint' moment:

Parents of children in England who regularly play truant could have their benefits cut, Prime Minister David Cameron has said.
The government's social policy review, set up in the wake of the recent riots, has been asked to consider the move, he said in a speech about education.
Discipline and rigour were needed to mend a "broken society", he said.
And parents needed to know there were consequences to their inaction, he added...
Naturally, this ties in with Cameron's hitherto hidden passion for collective punishment, first seen when he proposed, in all seriousness, that the families of rioters be thrown out of their council houses regardless of their own behaviour.
It all hints at a deep, unyielding ignorance of cause and effect. If you cut benefits to already dysfunctional families, you're going to make them even more likely to fall apart or, for example, go shoplifting in the local Co-Op because they can't afford food. You will make the problem worse.
The primary audience for these measures are right wing, vindictive and emotional. Preventing bad things is secondary to venting their mild sadism. In this sense, Cameron may be hoping that he will be seen as a forceful presence, though to anyone with any sense, he will continue to appear as an inept opportunist who's way out of his league.
Still, he can always fall back on an old trick from his PR days (and you can the man out of the PR cesspit, but you can't take the PR cesspit out of the man) and pretend to be the cleaner if anyone rings up asking awkward questions. After all, parents of truanting kids may have to pay a price for their incompetence, but old Etonians seldom ever do.
[SOURCE: BBC]

Couldn't agree more. Cameron as bad as Blair and Brown in looking for a supportive headline from the Daily Mail and Sun, and not bothering to think through his facile policy statements. We wanted leadership and all we are getting is platitudes.