How to Keep Enjoying Sport at 60+ 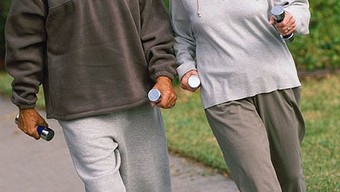 Here is how I keep myself fit even at my age! The breadth of sport and exercise that older people partake might just surprise you. The most recent survey by the Office for National Statistics revealed that well over a third of people aged over 65 took part in sports and exercise for the purpose of health in the last year. So what sports are popular with older people and how can you make sure you continue to enjoy sport and exercise?

Requiring only a mat and knowledge of a short sequence of positions, yoga is a very popular sport among older people. Yoga is free of impact and vigorous movement, and therefore is suitable for people for whom other sports are too strenuous. Many forms of yoga exist, but Hatha yoga (pronounced with a long first ‘a’ and a ‘t’ sound) is probably the most accessible to elderly participants due to its slower pace, flowing movements and gentle effect on the cardiovascular system. This Huff Post article lists its surprising amount of health benefits for older people.

Another popular way to keep fit post 60 is to use exercise bikes. Like yoga, using the bike can be done from the comfort of one’s own home and so is a convenient and private way to look after yourself. Picking up a static bike might be a little more hassle than finding a yoga mat, but ordering online couldn’t easier; you can order and pay online here  - and the delivery people will even install the bike for you. Cycling can conveniently provide the regular, 3x30 minutes intermediate exercise per week that the NHS recommends

Traditionally, boules has been a popular sport among older people. Unlike the preceding two pursuits, playing boules has a charming social aspect which makes it incredibly enjoyable to play – either one on one or in teams of pairs. Requiring nothing more vigorous than the tossing of a weighted ball, boules, is a great way to get out and spend a sunny autumn afternoon. Along with its icy Scottish cousin curling, it’s a sport that has always been dominated by older people, so it’s never too late to start. You can find your nearest boules club using this handy app.

Orienteering isn’t something you may have ever considered doing, but mandatory incremental age categories in competitive events means that the sport is very popular among older people. Requiring strong navigational abilities, teamwork and fitness, orienteering is unique kind of sport, requiring both clarity of thought and fitness of body. What many people don’t know is that the sport has its origins in military exercises for army officers. The benefits of the sport are those of a good day’s vigorous hiking mixed with the mental benefits of solving a tricky puzzle.