History Lessons: Prohibition and its Fallout 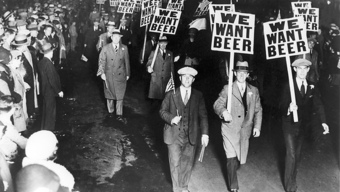 Prohibition, which lasted from January 16, 1920, to December 5, 1933, affected many social and economic factors in our lives, both then and now. Organized crime, death rates, and the amount of alcohol-related laws all went up.

Regulations were placed on the making of alcoholic products and the types of music people listened to changed somewhat drastically. Illegal bars and stills became a commonplace and corrupt official were plentiful. Moonshiners became a part of everyday life and new national pastimes were invented, along with movies portraying all of this.

To begin, the thought of Prohibition is reported to have started in the 1800's, when certain citizens attempted to convince the general population to stop drinking. Some members of society didn't want to totally eradicate alcohol; they just wanted to moderate the amount being consumed. Factions such as the Prohibition Party and the Women's Christian Temperance Union were considered leaders in "drying out" Americans. All of the interest in Prohibition almost completely died out after the Civil War began. After the war ended, there was a large resurgence of similar groups. The result of this resurgence was the passing of the 19th amendment, banning alcohol from being consumed or sold in any public place.

At first, people got around Prohibition by stockpiling any alcohol they had access to. They stored the alcohol inside their homes because drinking alcohol inside the home wasn't against the law; it wasn't illegal because the government had no pull inside private homes, and therefore didn't bother enforcing any restrictions on home consumption. After private caches ran out, organized crime stepped in to fill the gap. This led to a soar in the national crime rate. It also led to a rise in the death rate because people who couldn't afford to buy alcohol tried to make their own and ended up poisoning themselves.

Speakeasies, which were illegal saloons that required you to have a password to enter, became commonplace during Prohibition. Prohibition banned alcohol from being legally sold or consumed in public, so bars, or saloons, were forced to close. Many saloons chose to stay open until the Police shut them down and then reopened as Speakeasies. In New York alone, the 16,000 saloons that were shut down doubled in number to become 32,000 Speakeasies. The number grew so large because the law made alcohol a forbidden fruit. We weren't allowed to have it, so we wanted it even more; as a result, the number of locations where alcohol was available grew in number. Speakeasies, or "speaks", were the main customers of organized crime rings, like that of Al Capone. Al Capone, a well known Chicago crime lord, made almost 60 million dollars in 1927 alone, which is the equivalent of 2 billion dollars in today's money. During Prohibition, most of his money was made by producing and selling alcohol to Speakeasies and to private buyers. After Prohibition was repealed, he channelled his activities in other directions, and yet, the only thing he was ever convicted of was tax evasion. Moonshiners made a killing.

The people who created and transported alcohol were collectively known as "moonshiners". They made a lot of money from alcohol, and large portions of that went into buying important people. Mayors, Senators, Police officers, and many other important and helpful people were all targets. At one point, Al Capone had almost every important official in Chicago under his thumb or dime. But it wasn't just Al Capone, every organized crime ring bought officials. At the time, all that was needed was plenty of money and an official willing to look the other way.

Moonshiners also helped to create what we know today as NASCAR. They discovered that automobiles were really helpful to make speedy getaways, which naturally led to see who could "get away" the quickest. After Prohibition was repealed, seeing whose car was fastest eventually became a fun sport, which led to racing getting sanctioned by the government as relatively safe. Different racing leagues developed, and thus the creation of NASCAR. The habit of using cars to get away also inspired many movies, such as Thunder Road, Smokey and the Bandit, Dukes of Hazzard, and Days of Thunder, some of which also show the development of racing.

Another change that occurred during Prohibition was that people started liking jazz music. It was especially popular in Speakeasies and during the Great Depression. One of the reasons for its popularity was that African Americans were being accepted more readily, and since many jazz musicians were African American, their music was more accepted and liked. Another reason is that a lot of jazz is upbeat, though not necessarily happy. Jazz came into popularity during a sad time when people needed upbeat music to keep their spirits up. A third reason for the spread of jazz is that records were becoming more advanced and more widespread, so people could bring the music home with them, and didn't have to go out and pay for one show; they could listen to the music as often as they liked, and only pay for it once.

Then, on December 5, 1933, President Roosevelt passed the 21st amendment, repealing the 18th amendment, or national Prohibition. The 21st amendment, in addition to getting rid of national Prohibition, allows state, county, and local governments to decide when or if they want to repeal prohibition. For example, Mississippi didn't repeal Prohibition until 1966, for no obvious reason, and many counties and cities still enforce Prohibition in an attempt to change human nature. Others don't allow alcohol to be sold, purchased, or consumed on Sundays since it is a day of worship. But most states are free of Prohibition; in fact, on the day Prohibition was repealed, President Roosevelt said: "I think this would be a good time for a beer."

Thanks to the repeal of Prohibition, hundreds of workers had a legal job again, though not everyone was reemployed. About half of the previously open factories reopened. Still, the workers that were brought back were glad for the work. During Prohibition, people who worked at saloons or factories that produced alcohol had a hard time getting work because of what they used to do. "Drys", or people who refused to drink alcohol, considered anyone who had anything to do with alcohol to be disrespectable and went out of their way to convince others to share their opinions, even after the repeal. In fact, minutes after word of the repeal was passed down, truckers from every reopened factory were on the road, delivering newly legal alcohol to every saloon within driving distance. One factory in St. Louis had 50,000 barrels shipping to major cities the minute word was passed down about the repeal. Speakeasies became saloons again, organized crime found new money-making avenues, and the death rate from alcohol poisoning dropped. Alcohol lost its forbidden appeal, so the number of people who drank went down as well.

In conclusion, Prohibition affected us, socially and economically, in many ways. Crime rates shot up, along with death rates, alcoholism, and the number of illegal saloons. Jazz became popular; the idea of NASCAR was invented, and moonshiners became a part of everyday life. Organized crime suddenly became part of the scenery and Americans discovered that banning alcohol didn't work. For nearly fourteen years alcohol was a forbidden fruit, so a greater portion of our society wanted to drink and find out what the big deal was. This is just one of many reasons why alcohol and Prohibition affected us in so greatly. Many dissertations were written on this subject, but still, this time period will always be intriguing and worth of further research.

Hey Adam, ty for the article, can I ask you a sth personal in PM?