Gerry and the Pacemakers 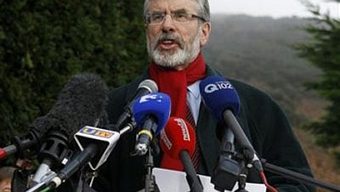 As Gerry Adams and Sinn Fein seem poised to make gains in the forthcoming Irish elections, are we facing a new era of radicalised politics?

Watching the Brits last night confirmed one painful truth - music these days is awful. Two decades of prosperity, give or take the current economic mayhem, and music - or at least what gets played on the radio - is as anodyne as rustling in polystyrene.

In the late 70s and early 80s, you had conflict, despair, tension, poverty and miners launching flying kicks at phalanxes of riot police. And yet you also had an impressive array of music that made sense not only to British audiences, but international ones too. What do we, relatively unscathed so far by recession and austerity, have to show for our times? A Take That comeback.

Still, as the feared Double Dip nears, and youth unemployment rockets, we can at the very least listen to some decent music soon. But economic woes also mean a rise in radical politics. We've already had this in America, care of the Tea Party, and in Europe, with the rise of the EDL, Geert Wilders and Hungary's Jobbik party. Hard times drive people to extremes.

On the left, meanwhile, there are few stirrings so far. Perhaps this lies in the simple fact that mainstream Social Democracy seems burnt out and cast out, like Gordon Brown's Labour Party or Sweden's once mighty SAP. Look beyond fringe outfits like the Socialist Workers Party and the Socialist Party, and there seems to be a vacuum. Perhaps there needs to be a credible left-of-centre option now, and Ed Miliband and the compromised train-wreck that is the Liberal Democrat party doesn't seem to be it.

In its place, however, another extreme could prosper. Sinn Feinn President Gerry Adams may be about to win a seat in the Irish General Elections, and his party double its seats in the Dail. Sinn Fein remains a party now almost on what could be termed the mainstream left, but which is also still haunted by its links to the IRA. Tellingly, Adams' electoral appeal may lie in these radical roots, as a sort of protest vote meets new-broom candidate; a riposte to yet another centrist mainstream government ruined by its own largesse and hubris. Sound familiar?

This will get worse as conditions do. The UK has a historical resistance to extremism, simply because recessions here are unevenly distributed. No such barrier exists on the continent or in the rest of the world. Gerry Adams may be leading a wave of radicals and near-radicals, with all the tumult that represents. Still, at least we'll have some good records to listen to...