Gaza and the madness of Hamas and Israel 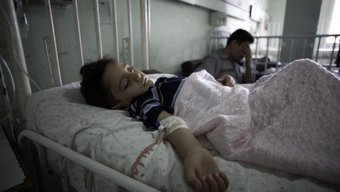 The wellbeing of civilians plays no part in the thinking of Khaled Mashaal and Benjamin Netanyahu as the blood letting over Gaza continues.

Gaza is a suppurating wound that we in the West are doing our utmost to ignore. For the past three weeks rockets and missiles have flown in both directions and while there certainly have been deaths among the combatants, the highest cost has been felt by the civilian population.

British Prime Minister David Cameron has berated Moscow for its support of pro-Russia rebels who brought down Indonesia Airlines flight MH17 in Ukraine with the loss of 298 people. Yet while castigating Vladimir Putin, Cameron has failed to criticise the US Obama administration, which in the same week that the UK sent £3 million in humanitarian aid to Gaza, sent $225 million for Israel's 'Iron Dome' missile defence system: the latter being approved in a US congress vote by 395 to 8.

The infrastructure of Gaza is in ruins. While shells rain down and air strikes target the fighters of Hamas and Islamic Jihad, how is it possible for civilians to live?

Before the fighting started the World Health Organisation reported that only 5.5% of piped water in Gaza met quality standards, while in 2013 the UN revealed that 340,000 of the people in the strip had to drink water of unacceptable quality. What must that figure be now?

Hamas has fired more than 3200 rockets into Israel in the past three weeks - the majority have been intercepted by the Israeli missile defences. The response, which is unconscionably disproportionate, has been more than 4600 artillery and airstrikes into an enclave that is has one of the highest population densities in the world (4505 per kilometre in Gaza city).

The result is very human and whether you are Israeli or Palestinian the cost has been close to 2000 people whose lives have been ended. These people had families too and were every bit as real as the people who were blasted out of the sky over Ukraine.

David Cameron's anger at Russia for supplying the military hardware that continues to fuel the unrest in Ukraine should be commended. However I would see him extend that ire to the British companies found to be supplying arms to Hamas or Israel - and at the very least withdraw their export licenses.

The United Nations has been, unusually, outspoken and continues to show more spine than our own prime minister by condemning the violence and urging restraint after successive ceasefires disintegrated within hours.

If Mr Mashaal and Mr Netanyahu have any conscience at all they will consider their ethical and legal obligations to protect medical services and the civilian population under International humanitarian law. Instead, both men prefer to deal in abstracts. It is harder to demonise someone whom you live next to, whose face you recognise, whose children play in the same neighbourhood as your own and whose everyday hardships and suffering you share. To portray someone as a hard line Zionist or an Islamic extremist is much easier.

Only Israel and the Palestinians can find a path to end the violence. It may cost many more thousands of lives before the collective weighs the price to be too high – there has to be the will for peace, and presently there is not.

The World Health Organisation publishes a report on the humanitarian cost of the continued violence (last updated July 28 2014); it is a depressing read, illustrating the horrendous conditions in which the thousands of civilians in Gaza continue to live.

However long the conflict lasts we must continue to voice our disgust at the arms manufacturers, banks and governments that continue to facilitate the conflict through aid and hardware. Foreign Office minister Baroness Warsi, who resigned on Tuesday morning, called the government policy on Gaza “morally indefensible”.

The same applies to us; decisions are taken on our behalf and in our name. Is this something you can live with?