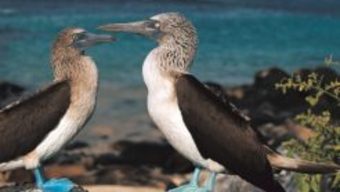 Posted on: 06 September 2017 by Celeste McConnel

Boobies are known for their distinctive webbed feet and intriguing courtship dance. The term booby originates from the Spanish word for clown, bobo. 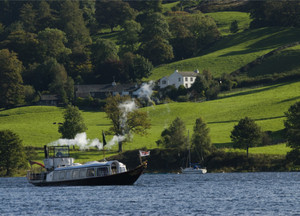 Boobies are known for their distinctive webbed feet and intriguing courtship dance. The term booby originates from the Spanish word for clown, bobo. This name fits because boobies seem inept on land due to a lumbering gait. However, these seabirds make fierce hunters and appear exceptionally graceful in flight. While not necessarily confined to the Galapagos Islands, three typical species make their home there.

In addition to the red feet, this species has beautiful patterns that include sky-blue bills and pink markings around the chin and between the eyes. Since they’re the smallest of the species, red-footed boobies easily fall prey to hunters, especially the Galapagos hawk.

However, these excellent flyers are good hunters in their own right. Their admirable stamina can carry them for up to 93 miles when searching for food. Red-footed boobies fish the farthest away from the shore in order to allow the other two species their fishing areas closer to the coastline. Because of their vulnerable size, they regularly hunt in larger groups. Their small size also makes them deft enough to capture flying fish.

Unlike Nazca and blue-footed boobies, the red-footed ones build nests in trees, not on the ground, and they only lay one egg. Both parents incubate their offspring and take turns sitting on the egg. Baby birds will hatch after about 44 to 46 days.

While the Nazca booby doesn’t have brightly colored feet, its black face on a pure white head still makes for a striking look. Since Nazca boobies have white necks as well, it looks like they’re wearing a mask. They used to belong to the masked booby species but now have their own category because the bill color differs. Instead of yellow, it’s orange/reddish.

This species is the largest of the three. Its females produce two eggs within several days. If both hatch, the older bird pushes the younger one out of the nest. If it doesn't perish from the fall, the younger one usually succumbs to cold or thirst. This happens even when food is plentiful, and the parents do not intervene.

Like the name suggested, this species has bright blue feet. The birds use them to attract mates, but you can also tell how healthy and nourished they are by checking the vibrancy of the color. Additionally, the webbed feet give clues in regards to gender and age. Younger birds and males have light blue feet while dark blue appendages belong to females. Over 70 percent of the global population of this species lives on the islands.

Blue-footed boobies feed on small schooling fish, such as anchovies, sardines, flying fish and mackerel. They fish close to shore where the other species don’t feed. Since females and males have different body types, they hunt differently. Males have smaller bodies with proportionately larger tails, so they can fish shallow and deep waters. Females are larger and can carry more food.

Boobies often make sudden dives into the water while hunting. They can go as deep as 80 feet and reach speeds of up to 60 mph. They breathe through the sides of their mouths, and their nostrils are permanently closed to allow for these maneuvers.