Egypt on the brink 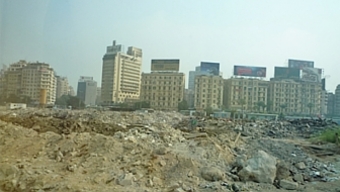 The protests in Egypt are nearing their critical hour

And so, after the Euphoria, the come-down. Or at least the dodgy dictatorship's attempts to spin its way out of the situation, with one Egyptian government figure claiming that the anti-Mubarak protesters are all looters and if Mubarak goes, Egypt will turn into Iran 2.0.

One wonders if many leaders in the West secretly agree with this pessimistic approach. It's hardly a winning sales pitch - “keep our creep in 'lest bigger creeps with links to fundamentalists get in” - but craven politicians may see it differently, as evidenced by Tony Blair defending the indefensible and Obama's rather ambivalent speech.

Cleverly, Mubarak said he would step down - eventually, creating a wedge that might splinter the protest movement between those who take him at his word, despite evidence to the contrary, and those who don't.

Mubarack also has enough clients (and I mean this in the old Roman sense of the word) to come out on the streets to support him in state organised counter-demonstrations, claiming that all this wanting free speech and democracy is damaging the country's image abroad. In that sense, they're in agreement with the Chinese government who are either censoring news of the events or claiming this is further proof that liberal democracies are a one-way ticket to anarchy.

All will hinge on whether the protesters hold their nerve and aren't sundered by the spin operation, and by which way the army finally goes. Presently, they have stopped siding with the protesters and are sitting on the fence as pros and antis fight it out. They may have to choose one or the other very soon. The tipping point grows near.

In any case, Mubarak is exposed as a rather limp, pale excuse for a dictator. At the mercy of his military, afraid of a public he once tyrannised and with his only selling point being that he is simply the devil we all know - it's hard to see why he hasn't yet fled abroad to spend more time with his money.

That he hasn't suggests an irrational need for power, which will probably be his undoing. For now, it is a simple matter of waiting to see how much harm is done before he finally goes.