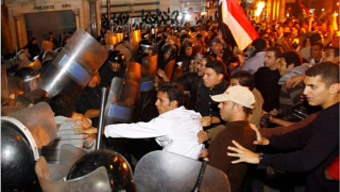 So far, not an inch given nor surrendered. The media, meanwhile, notes all sorts of other developments.

So, what to make of the situation in Egypt as of this afternoon?

The Guardian reports that the 'Day of Departure' rally in Cairo's Tahrir Square has been a success, but false rumours of Mubarak standing down abound and various Egyptian politicians - including Arab League head Amr Moussa – are getting ready to jockey for the top job once or if the president finally goes.

The Telegraph confirms hundreds of thousands have attended, and that a former state TV reporter who has rejected the party line has just given an interview to Egyptian media. The US media is also wondering, in that slightly naive American way of theirs, why no Stars and Stripes flags are getting burned. Tensions, meanwhile, linger.

Al Jazeera, when it's not getting its offices raided by state heavies and Mubarak supporters, is saying that a senior general was spotted touring the outskirts of the rally, talking to soldiers, who've been arresting regime loyalists allegedly out to start trouble, as a relatively tiny pro-Mubarak counter-protest nearby tries to make its voice heard. One correspondent for the network also claims there are over a million protesters out on the streets of Alexandria.

The Washington Post refers to the turnout as 'vast but orderly', noting also the journalist-bashing by regime loyalists and discussing the possible scenarios that will resolve this crisis. Mubarak is claiming only he can run the country as (anonymous) sources say a hand-over to Vice President Omar Suleiman, whose own dodgy past may count against him as far as the protesters go, may be likely.

The BBC reports the result of a (presumably non-scientific) telephone poll, with a clear majority wanting Mubarak to go now. State media has also started interviewing pro-democracy protesters for the first time and a twitterer is warning people to stay away from the presidential palace lest they be shot. This could be the real test for both sides.

CNN observes that technology has allowed journalists to cover stories in greater detail and on the spot, but also makes them visible targets for those with a less sentimental attachment to the free press - hence why the network has been ordered not to film the day's events. Also, it reports that government vehicles have been seen running people over. Somehow, you get the impression that the Egyptian government just doesn't get the whole PR thing...

The Huffington Post says the pressure is mounting on Mubarak (not that he seems to care), while a disabled man in a wheelchair goes crowd-surfing (literally). More significantly, the regime seems to be getting desperate as its attempts to hack the Al Jazeera web site seems to show. The HP also reports there are calls to march on the presidential palace – guns or no guns - as officials start resigning in protest at the government's behaviour. Even Fidel Castro is claiming Mubarak's goose is now cooked.

The Daily Mail mentions that possible Mubarak replacement Suleiman is blaming the foreign media for 'raising the energy of protesters', which makes it sound like lucozade, as his boss moans about being 'fed up' while blaming the Muslim Brotherhood, and a picture shows a reporter being rescued by soldiers after being beaten by pro-government supporters.

Finally, The New Republic argues that the present crisis is due to US aid to Egypt not coming with pro-democracy strings attached, while the closest parallel to what's happening there is the Indonesian revolution, and not the fall of the Berlin Wall in 1989.

For now, the stand-off continues.

Is this any secret source of information for the new comers that they need an security check process. before going forward we have to complete this blog https://prowritingpartner.com/papersowl-com-review/ and one more step will lead us to the official page.