Effing and blinding over Rooney 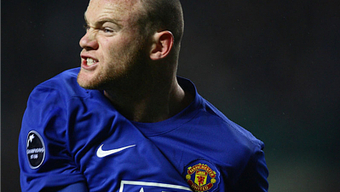 It's a hard life being the FA's millionaire scapegoat

It's hard trying to find nice things to say about Wayne Rooney. So let's not even try. He's coarse, erratic, thuggish and petty.

True, he's done his bit for crossing the generation gap - ask that grandmother he hired one evening .

He is also a role model to his fellow kobolds, proving you don't have to spend your life toiling below the earth in gnomic rage, but can occasionally make it on the surface by spending your life scowling, getting yellow cards and swearing a lot.

The point is, Rooney is Rooney. So why punish him, all of a sudden, for the same gauche antics he's been getting away with since he started earning more money than some third world countries? Yes, his idea of celebrating a hat trick (and saving Man U from a proper routing) is to get angry and start verbally abusing a television camera. And yes, that makes as much sense as burning your shed down after a nice bowl of jelly. But are you actually surprised? Of course not - he is what he is.

So why does the Football Association feel all of a sudden that it has to issue a two match ban for something Rooney does pretty much all of the time? (You can imagine the conversations at the Rooney house - 'Good morning, Wayne. Had a nice sleep?' 'ArseGitCobblers!' 'That's nice to hear, love.') Put simply, worn-out, discredited sporting associations like to 'get tough' in a desperate attempt to appear half-relevant.

It won't work. The FA is far too close to Sky (and Rupert Murdoch) and too involved in making money from football to be able to adequately police football. Criticism of their uneven treatment of clubs and players is public knowledge. And the fallout from England's doomed 2018 World Cup bid has simply made the organisation look even more discredited.

In other words, we have an organisation that is in sore need of regaining its reputation, so it makes a big public scene of punishing someone it was willing to let off many times before. It's a PR stunt that's backfired. More to the point, it just emphasises what we already know - Rooney swears a lot and the FA is a bit rubbish.