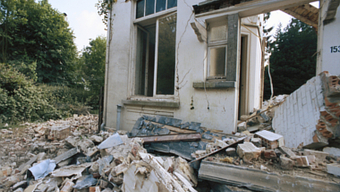 As today's contraction of the economy reveals, just slashing for ideology's sake is every bit as ruinous as just throwing money at things.

It would be easy to laugh if it wasn't so tragic. For all the cuts, economies, bowls of gruel and rhetoric, the economy has still contracted 0.5% in the last quarter and the weather is getting the blame.

The real reason should be plain and obvious. When you cut spending too quickly, that has a knock-on effect on businesses, the retail sector and industries such as construction. All those sacked government workers aren't going to find jobs soon and in the interim, they're not going to be spending the money needed to get things going again.

This hits the private sector hard too. If your customers aren't spending and you haven't got too many private sector spenders in your midst (this is less of a problem in, say, central London than in Newcastle) then you in turn will have less money to spend, and so the downward spiral continues.

Then there is the psychological impact of government parsimony. Would you want to spend money if a friend or relative is laid off from their council job, or if you know your children will need £9000 a year for a university education you got for free? Any sensible person would be squirrelling away their money just in case. After all, they're only following the government's example.

But here's the thing. All the government really needed to do was make just enough cuts to stop the country tanking and then put the rest off until it really needed to. In the meantime, all manner of rationalisations and efficiencies could have been found so less redundancies and brutal cuts would need to have been made.

Of course, the cuts were the realisation of a deep, primal libertarian need on the part of the Tories to cut cut cut while proposing 'pie in the sky' like The Big Society. They were not alone in this desire - anyone who read the Orange Book should not be surprised at all the concessions made by the Lib Dems. Pragmatism only comes to those who have been given a bloody nose, and the coalition may soon be about to get one. Sadly, by then the damage will have already been done.