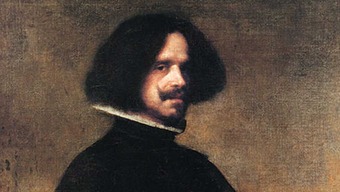 Diego Rodríguez de Silva y Velázquez (1599-1660) of Sevilla, Spain painted in the Baroque style. He achieved fame in his lifetime for painting kings and queens with the royal families. Between 1611 and 1617, Velázquez worked as an apprentice to Francisco Pacheco.

During his early years, Velázquez studied the contemporary style of realism. He tells about himself indirectly through his paintings. People sometimes called Velázquez lazy because he rarely finished his paintings.

Velázquez's early paintings show a strong naturalist base. He worked outside to get a direct representation of nature and learn about light and shadow. Velázquez learned his skill by painting plain people and simple objects. Velázquez said, "I would rather be the first painter of common things than second in higher art". Velázquez's religious paintings use models from the streets of Sevilla. For example, Velázquez painted his own family, including himself, in Adoration of the Magi.

In 1622, Velázquez traveled to Madrid to see the royal painting collections and search for a position as court painter. Soon after, the king's court painter, Olivares, died and the king summoned Velázquez to Madrid. Velázquez took over the position of court painter for Felipe IV. He painted many pictures of the king, the royal family, and members of the court. Mythological subjects occupied his attention, also. He painted few religious subjects while working for the king. Velázquez's surroundings have influenced his paintings. During this time, the country was continually plagued with war. In 1634, Velázquez controlled the decoration of the throne room in the new palace. The decoration included twelve battle scenes in which the Spanish won. Velázquez contributed to the decoration with Surrender of Breda, which shows the Spanish general meeting with the leader of the defeated Flemish troops.

Velázquez's acquaintances also influenced his art. He knew the members of the intellectual circles of Seville well which helped his later work on mythological and classical subjects. Conversations with Peter Paul Rubens inspired Velázquez to visit the art collections in Italy. While in Italy, he studied the art of the Renaissance and contemporary painting. Joseph and His Brothers combine Michelangelo's style with chiaroscuro, which is light and shadow techniques. He also painted Pope Innocent X, another famous work, while in Italy. Here, he learned about using a very limited palette from Caravaggio and Ribera. Velázquez taught Bartolomé Murillo and influenced Goya, Corot, Courbet, Manet, and Whistler in their art.

Las Meninas es un pintura de aceite en tela. It was painted with brushes on a huge canvas. The room is dim with soft light around the people to define them. There are cool, dark colors including reds, grays, browns, and greens. The brushwork is quick and assured, showing that the artist is aware of his skill. The painting gives a calm feeling because the dog is sleeping and the maid is curtsying. It captures a living moment. The king and queen are blurred in the mirror because Spain was rapidly losing power at the time. This painting fits the baroque style because it is realistic and brings emotion to the viewer.

Today, the art of Diego Velazquez is the subject of many studies and research papers. His influence on the cultural scene of Europe is huge and every person who is interested in the artistic heritage of this period of history should approach and carefully analyze his work.