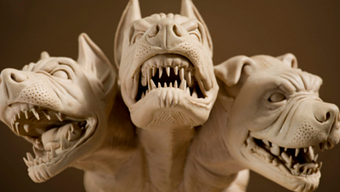 The debate on dangerous dogs is a deliberate distraction from the real issue: Social decay and antisocial behaviour.

The danger with banning things is that this, by definition, removes responsibility from the people who use them. Sometimes, of course, it has to be done. No one seriously thinks toddlers should be allowed to drive cars, for example, or businesses be allowed to sell dangerous goods or contaminated food.

On the other hand, a ban neatly dodges the issue that people want to do bad things and that removing the opportunity (at least officially) is an easy way out of making it look like you're doing something.

A good example of this is the 1991 Dangerous Dogs act, amended in 1997. This banned certain breeds, restricted how owners handled their pets in public and gave powers for dogs to be confiscated by the authorities if they posed a danger to the public. Yesterday, the Northern Irish assembly went further and passed a law giving greater power to dog wardens and imposing compulsory micro-chipping on dogs themselves.

It is, of course, a classic response to a moral panic, after years of lurid tabloid reports of both adults and children - even other dogs - being mauled or killed by aggressive, violent dogs. Whether these laws are proportionate or a sop to a fearful public is debatable. What is undeniable is that they won't work, as 'dangerous dogs' have become desirable fashion accessories for a certain kind of thug, but they also have several major flaws.

To begin with, they ignore one key fact - dogs are man-made. Millenia of selective breeding has transformed what was originally a wolf into a completely different species that interacts with and empathises with humans to a level that is alien to the rest of nature. Dogs are intelligent and social, and able to recognise and respond to human behaviour in a truly remarkable fashion. They are, in effect, symbiotes, animals who have proven to be mutually beneficial to us, but also blank slates onto which we project our needs and desires.

In other words, dogs are a reflection of their owners. Media narratives like to paint certain breeds as particularly vicious, while ignoring cases where the opposite is true, but in any case, they forget that whenever a dog attacks a human or another dog, it is a failure not of breeding but conditioning. The dog is simply following the lead its alpha human owner has set it.

Of course, it is much tidier and less complicated to just blame the dog. The focus in both news coverage and politicians' response to tragedies is to emphasise that the dog had already shown signs of aggression or that there had been complaints. The implication is that the dog was tainted with violence from the very start, which rather ignores the fact that if dogs really were so inherently volatile, they wouldn't have been domesticated in the first place.

The real issue is the owner. You can ban, remove, destroy and ban as many dogs as you wish, but it doesn't remedy the fact that there are people in this country who are willing to raise and train animals to be dangerous, unstable and aggressive.

But dealing with these people requires resources, political will and our society as a whole standing up to the distasteful, antisocial elements in our midst, and resolving the social rot and dispossession that moulds them in turn. Instead, we go for the easy option and ban dogs instead. Anything, then, but making hard choices and a stand for a society where people are safe and so too are animals.