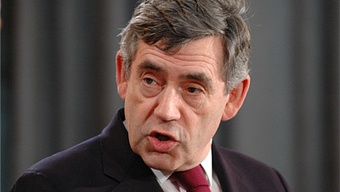 Having helped show him the door, a certain newspaper is now trying to be more cosy.

Was Gordon Brown a monster? The Daily Mail has, grudgingly, admitted he wasn't:

"Indeed, the Queen liked him —  and was once even heard to say: ‘He’s such a charmer.’ Many who have met Brown socially would agree, though his staff despaired at his repeated failure to project this quality on the public stage. Those closest to Brown say that he is a highly emotional man, capable of acts of exceptional kindness. On a more mundane level, he’d buy his staff presents — usually books from ­Amazon — for Christmas"

Of course, this being the Mail, it couldn't resist sticking the boot in:

"Those who worked with him every day around a large horseshoe desk at No 10 grew to accept, manage and ­forgive his eruptions. But those ­outside this coterie were sometimes deeply offended when he shouted at them, often sprinkling his invective with personal abuse and liberal application of the word f***."

As an aside, how does one pronounce the word 'f***'? The first letter's a doddle, but those astericks are a kicker. Gordon must be a talented man.

In fact, Brown's main problem seems to be that he's too honest. In today's politics this virtue can be a poison:

"Significantly, he couldn’t understand why his aides wanted him to give a television interview to Piers Morgan in which he would talk about the death of his baby daughter. ‘Why do I have to do all this? Why do I have to bare my soul?’ he asked his advisers. ‘Because people deserve to know who their Prime Minister is,’ was their reply."

Err, no, people don't 'deserve' someone's personal tragedy being draped over their screens. Brown certainly didn't deserve crypt ghouls leering over the loss of his daughter. (For that matter, most people don't deserve the trauma of being interviewed by Piers Morgan, but I digress.)

No, people deserved a better Prime Minister, and Gordon Brown was not that PM. Far be it for the Daily Mail to question its own mawkish, intrusive tendencies though, nor its part in helping create 'Floral Fascism' in the wake of Diana Spencer's death. That would take real courage, rather than being sort-of-nice to a politician some time after hounding him out of office.

Anyway, one gets the impression that Brown is happier now he's out of No.10. He certainly sounds happier. Mobile phones across the land can now sleep soundly in their beds.