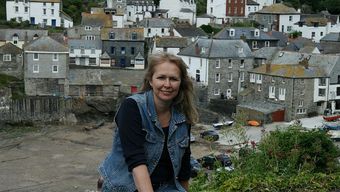 A weekend road trip down the coast of Cornwall was an enriching experience in more ways that one!

Going slightly stir crazy in the tiny flat, we agree it is time for another weekend road trip. We are yet to explore the south west corner of the UK so work out a route out of London across to Bristol, down to Devon and along the Atlantic western coastline driving down to the tip of Cornwall then back in a loop along the southern coastline of the English Channel and returning through the lush farmlands of Hampshire. A round trip of about 770 miles. That is the Grand Plan.

Heading off at 9.30 am in our sturdy black Nissan Note hire car, the drive on the three-lane motorway to Bristol is smooth and the first decision-making clash occurs around lunchtime. Ravenous, I want to head straight to the next major town for a hearty roast in a quaint English pub but Andrew fancies driving through the Exmoor National Park on a ‘secondary’ road. I imagine it will take much longer meandering through the forest than powering along the highway directly to Barnstaple. I let my stomach rule and typically talk Andrew down and get my own way. It turns out to be a mistake.

There’s something menacing and uninviting about rough country towns on Saturday afternoon when the rowdy locals are out in force. We poke our heads into about eight pubs and restaurants to be repelled by bustling scenes of young mums juggling mush-spattered babies, grisling toddlers and bulky prams with dirty bowls and sauce bottles strewn across tables while raucous men hold incoherent conversations at the bar. It is like intruding on someone’s private kitchen and living room.

We push our way through crowded streets in pursuit of a welcoming refuge and succumb to the eccentric Vegan Owl Café hidden down a side street. We eat vegetable pie made with chickpea pastry and read the latest Morning Star Socialist Left newspaper featuring a harrowing article by my hero, crusading journalist, John Pilger about the torture of innocent civilians in Iraq by British and American soldiers. I am left bereft and yearning to be an activist for world peace. I spot a flyer promoting a folk festival headlining Melanie, whom I adored as a teenager, and I am consoled to know she was alive and kicking; that the protest music of the 60s and 70s endures, even if the idealistic rebels are ageing and weary.

We make it to Ilfracombe: a picture postcard town on craggy cliffs overlooking a dainty harbour of bobbing boats and crammed with ‘quaint’ pubs, upmarket restaurants, icecream parlours and pretty shops to set the tourist heart alight.  Aahh! And there is that perfect little pub, with glossy painted frontage, cushioned maroon leather booths and a delectable menu of comfort foods. If we had skipped Barnstaple and come straight here we could have dined in style.

If only we could decide together, I muse, instead of being at loggerheads where one dominates and one concedes. I recall the Win-Win Six Step Decision Making Process I learned through Effectiveness Training some years back. I dust off the cobwebs and strain to remember the steps. Step One: both partners express their needs; Two: brainstorm solutions; Three: eliminate unsuitable solutions; Four: choose a solution where both sets of need are met; Five: implement the solution; Six: later, review the outcome.

If this process sounds stiff and formal, it sure beats going around in circles (Andrew’s style) or bludgeoning your partner with a convincing argument (my style). It requires each person to dig deep and express their underlying needs and be willing to accept a flexible, mutually satisfying solution. By taking the scenic route through the national park, Andrew could have met his need PLUS I could have had my hearty lunch in Ilfracombe. Anticipating countless daily decisions ahead in our forthcoming travels through the States, I resolve to use the trusty Six Steps.

Ilfracombe in Devon is where our sister-in-law, Heather and her second husband Neil and daughters lived and we are curious to see their old stomping ground. As Aussies used to flat terrain, we marvel at how these coastal villages are built along steep cliffs facing out to sea. Heather and Neil ran a kiosk on the beach in summer and lived in an old farmhouse and I can picture them in windswept winter months rugged up against the elements and can see the girls clip clopping on gentle horses along country lanes.

The next treat is a visit to Port Isaac, the remote seaside village where our favourite BBC television series, Doc Martin is filmed (in fictional Port Wenn.) I have dreamed of living in such a cosy, close-knit community with its array of quirky characters, where the brilliant but cold and distant, boarding school damaged Doc finally gets together with the warm and vivacious, beautiful teacher Louisa. The stuff of romantic tension tantalises viewers while feasting on magical scenery in the timeless village.

Driving into Port Isaac, we quickly realise the miniature roads are not designed for cars and startled pedestrians are giving us disapproving looks as we try to weave our vehicle along cobblestone lanes that narrowly divide historic cottages. I empathise with locals who, having chosen to live a quiet life, resent a TV show putting their little village on the map and attracting curious visitors. In the tug of war between preservation and development, clearly preservation of the old ways has won out in Port Isaac. I can imagine that any innovative stirrer who dared to stand up in a public meeting proposing a car park for tourists would be promptly howled down!

Amusingly the only place to park is the beach where many Doc Martin scenes are filmed and I am delighted to be on location and gazing up at the Doc’s surgery. I recognise the outdoor café where Louisa sat nervously sipping a drink, stood up by her reluctant beau, in one episode. The giant seagulls are circling overhead and I am on the look out for the irascible roly poly Bert and his blue-eyed son, Al, who has a crush on the meddling receptionist.

We hike to the top of the cliff seeking accommodation but the palatial guesthouse with the commanding view is booked out. This time I acquiesce to Andrew’s plan. Even though it is 6 pm, he is determined to drive to St Ives, a further two hours along the coast, drawn by a sentimental desire to stay in the resort where his mother as a girl, her parents and brother spent happy seaside holidays.

The Wallen family would journey in a train from Crewe to St Ives and frolic on the beach and stroll the promenade. I sense that this is a significant pilgrimage for Andrew, to honour of his mother, who died last year. He is still grieving.

Somehow this visit is blessed. As the sky is brushed in the pastel hues of twilight, we drive along rows of snug yellow lichen-roofed houses overlooking an exquisite beach of clean sand dotted with jaunty fishing boats. The esplanade is lit up with the flickering lights of countless cafes and the streets are alive with cheerful holidaymakers.

In search of a B&B we face one rejecting No Vacancy sign after another until finally there is one room left at St Eia hotel, with hanging baskets bursting with vivid flowers and windows offering sweeping views across the bay. This is a magical moment of perfection and tonight we feast on scallops and mussels in a romantic restaurant. I am overwhelmed with gratitude. Life doesn’t get much better than this. 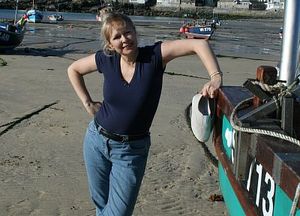 Up early Sunday morning before breakfast, we explore the deserted shoreline, snapping photos, breathing in the invigorating air. The sunshine is gentle on my face, my ears are ringing with squawking seagulls and my toes are chilled in the icy shallows of the Atlantic. My heart is bursting. Why do I love the Atlantic Ocean so much? I don’t know. Perhaps this affinity comes from too many Irish folk songs swimming in my head. Poking around the beached fishing boats, Andrew is thinking about his mother and seeing a laughing, carefree girl. I am thinking about my father and his love of boats and connection with the open ocean. Both of them are at peace, cradled in God’s grace.

Driving to Land’s End, the furthermost western point of England, I imagine that such a final and desolate location offers the perfect escape for any absconding spouse, defiantly running away as far they can go! I recall the hymn “I will go to the ends of the earth” and believe we have found it! Okay, there might be more remote locations in the far flung reaches of the planet but this one conjures up images of shipwrecks and pirates and lawless isolation. Ruins of ancient brick houses dot the roadside and the tundra is hardy and forbidding. So we sit on a forlorn bench at Land’s End and gaze at the treacherous reef that dashed the boats and hopes of doomed sailors.

The nearby township of Penzance, flaunting gawdy murals, is also reminiscent of patch-eyed pirates and high seas high jinx, and I remember my star turn in the chorus of my first musical The Pirates of Penzance staged at the prestigious Altona Civic Centre! What ever happened to my performing potential? Thank Goodness it was left behind on the creaky boards of that forgiving stage.

On another nostalgic quest we decide we must swing into Torquay, the seaside town on the English Channel, after which the seaside town on Victoria’s Bellarine Peninsula is named. We lived in the Australian version for several years so were are curious to see the original. Those Torquay days in our first big home were fun-filled times with our adorable son, our first Labrador puppy and the birth of our precious daughter, when an excited Nana and Pa drove down from Queensland with a van loaded up with baby gifts, bursting with love and happiness.

We tuck into fish and chips (pre-vegetarian days) on England’s Torquay harbour, jam-packed with luxury million-dollar yachts. After devouring a massive piece of battered cod, I wonder whether it is possible to deep fry fish and chips safely in an oil that doesn’t hydrogenate into candle wax; having read an alarming book about the dangers of Trans Fat. (Mental note to self: research this point and contact the author!)

When we hit the sprawling town of Bournemouth I am busting for a wee and we become entangled in a maniacal seaside carnival in desperate search of a public toilet. Andrew shivers with his aversion to ‘carnies’ and we can’t get out of there fast enough!

Winding through cattle-grazing paddocks on the endless miles of M3, in a universal scene which is played out on motorways across the world, traffic is slowed to a crawl by mysterious Roadworks Ahead. When we finally pass the obstruction, it turns out to be one lonely workman undertaking some inscrutable task.

The return trip to London takes almost 12 hours. We arrive home at 9 pm, dizzy and dazed. I am keen for a soak in a hot bath then collapse into bed in a swirl of mystical dreams, processing the weekend’s evocative journey into the poignant past, the pleasures of the present and promises of a rosy future. 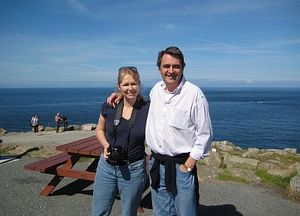