Counting the human cost of the London riots 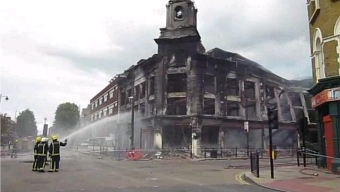 As some politicians stay on holiday, the damage done may never be repaired

As the havoc from this weekend's riots in Tottenham, Brixton, Wood Green and Enfield becomes clearer, it's worth remembering not only the overall cost of the riots, but the individual losses too:

...Aaron Biber, 89, who has run his barber shop off Tottenham High Road for 41years is unable to make a cup of tea this morning because the looters stole his kettle.

"They even stole some cotton wool I had on the counter, I just can't believe what I am seeing," he told me.

As he is uninsured he may have to close his business as he can't afford to have his window and door repaired...

We shouldn't forget, after all, that the damage done to these areas will directly effect them for years to come:

Born and bred in Tottenham, he said: “I was here during the Keith Blakelock riot in the 80s, but that was contained on a housing estate, this was 100 times worse. This community was already dying, now it’s dead. I can’t see how it will come back from this.”

Theresa Monuro, 54, a support worker, added: “I’ve lived in Tottenham 20-odd years and I’ve never seen anything like this. They were burning everyone’s property. It’s disgraceful.”

Every shop along this stretch of bustling Tottenham High Road had its windows smashed. Just yards from Tottenham Hotspur’s White Hart Lane stadium, rioters trashed the ticket office, breaking all the windows and wrecking furniture inside...

Meanwhile, the Prime Minister, the Metropolitan Police's head and the Mayor of London are all still on holiday, and Home Secretary Theresa May only flew back after a second night of violence. While his determined response may well help make Tottenham MP David Lammy's career, the lack of interest elsewhere is still shocking.

Meanwhile, reports of violence in Hackney have just come in.

[SOURCES: The Telegraph & The Mirror]