Commuting around the blindspots 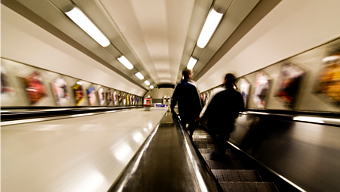 Overheard musings of a modern-day commute

It was Friday morning and was as to be expected. Yet sometimes the daily commute can provide moments that are both sublime and proof that the cosmos is utterly insane. This was one such commute.

The first such moment took place at Old Street Tube Station. To set the context, this is a relatively good place to be homeless. (Note the emphasis on relatively.) But it's well lit, it provides shelter, and the toilets are both free and clean, though the UV lighting makes them look like a bordello for cyberpunk vampires.

Best of all, there's plenty of commuters to beg from and it feels much more open and like a public thoroughfare, which in many ways it is, than some of the more enclosed tube stations.

Naturally, the homeless have set up shop here and pretty much live on its periphery full time. It's almost like an office, where everyone chats by the water cooler or the photocopier, only instead it's near the stairs and they're either sitting cross-legged on the floor with a sleeping dog next to them, or they're sitting on the steps and drinking special brew.

Today's conversation was about marketing, or rather the cardboard sign the man with a dog had propped up in front of him. It said 'HOW CAN I GET A JOB IF I DON'T HAVE A HOME? (PLEASE GIVE GENEROUSLY.)'

It had not gone down well.

"You need to get rid of that sign, mate" said the beer drinker, sagely.

"Yeah, but are they donating?"

"Not at the moment."

The dog listened in with one eye open, but looked like he wanted to sleep.

It was a rare glimpse of insight, where the layers of artiface and nonsense that make a city run were swept away. The beggar wasn't getting donations because he was being too honest. You cannot get a job without a house, and it's hard to have a house without a job.

But accepting that means accepting you're not in charge of your own fate, and that there's a huge gaping abyss out there just waiting to suck you, your career and all you've ever worked for into it.

Miss a pay cheque and you too might be trying to make social commentary on the pavement outside a tube station, while your peers issue a scathing critique of your PR strategy.

What he should have done is made himself as pitiable but as safe as possible. "Homeless and Hungry. I am not on drugs. Please give generously so I can get a bed tonight." Make the donor feel both obliged and smug; grovel and in so doing, flatter them as they chuck you some change.

Just don't ask them to ask questions of themselves. That's too much reality for them, and they're living the 9 to 5 dream. (Weekends off.) His friend was right. You had to leave the big questions unanswered. You had to just survive, just like everyone else, and not ask why.

I got on a bus. In front of me sat a posh mummy with her posh little girl, who screamed wealth right down to her straw boater school uniform and presumable pony fixation. As befits most happy children, the girl was talking a lot, mainly nonsense, with moments of Zen wisdom entering the equation.

"Really? What do you miss about that, dear?"

"Well, mummy, I don't actually remember what it was like being a baby, but I'm sure I liked it."

It both made no sense, and a lot of sense. No one paid much attention.