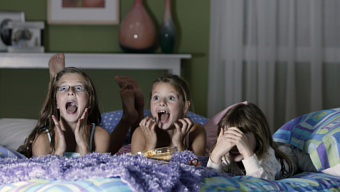 The panic over 'sexualised children' is misplaced

And so, like a paladin on his charger, the government has taken up arms to fight off the dragon of child endangerment, protecting our little snowflakes from depravity and the end of innocence...

This is a roundabout way of saying the government is trying to look effectual by banning lingerie for 7 year olds and Rhianna gyrating too much in her pop videos.

We have, of course, been here before. The New Labour era was typified by ever more hysterical counter-measures against an invisible and largely non-existant paedophile threat.

The Tory administration before then had waged war on video nasties and Chucky The Killer Doll. Mary Whitehouse got very upset about pretty much everything.

And gore splattered boys' comic Action was neutered and eventually run out of town because, apparently, young males weren't already rolling around in their own filth.

The deja vu extends still further. If you want an icon for these compromised times, look no further than Nadine Dorries, who is not only clamouring for these measures but is hellbent on spreading the palpable and harmful nonsense that the only sex education a girl needs is how to keep her legs crossed until her wedding night.

Like all good moral entrepreneurs, she has not only seized upon a current social anxiety and amplified it, but actually believes her own faintly sinister authoritarian doggerel. She also admitted to lying on her blog, was investigated for expenses fiddling and ran off with another woman's husband, all of which somehow doesn't disbar her from lecturing 13 year olds on personal morality.

Children are neither miniature adults nor drooling idiots, and trying to hide the loose, ugly mess of adulthood from them may be counterproductive.

Put simply, you can always turn the television over and say 'no' when your 10 year old daughter (and in extreme cases, your son) wants you to buy a padded bra with 'strumpet' etched on in rhinestones. Raise your children well and they won't be sexualised - peer groups and what goes on at home have more of an effect on young people than popular culture. Children appreciate consistency and clear boundaries. They don't appreciate adults overreacting over everything.

Naturally, the news media is to blame too. There's something deeply hypocritical about demands for censorship from organs that scream every time their own 'free expression' is gagged.

This is, of course, a distraction from the real issues. Dorries is advocating a return to more conservative sexual mores for girls, of the kind that preaches that men can act like pigs while women must act like nuns, and which ruins lives in the United States, while the 'new watershed' seems less intended to protect children and more to sweep sex and sexuality back under the carpet.

Neither will it dent teen pregnancy rates nor the extraordinary social pressures that girls and boys find themselves under. They'll still be forced to conform through consumerism, but as long as there is no copulation inferred, it won't – apparently - be a problem. Won't someone think of the children?