Cameron Says It As It Is! 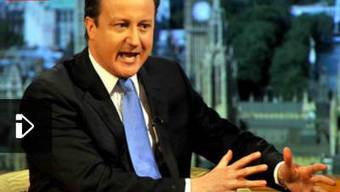 Crisis in Eurozone only half way through reveals Prime Minister.

Those of you who watch the Andrew Marr programme will have heard  David Cameron calmly announce to the world that the crisis in the Eurozone is only half way through! Now you may have thought that this was just Marr’s expert questioning and Cameron let slip! Get real; this was a staged as any theatrical performance.

Cameron arrived in the studio with more than likely the sole intention of letting this ‘slip’! Nothing Prime Ministers say is ever spontaneous – he wanted this out into the general news arena. With the London Mayoral elections this week, what better time to tell Londoners that things were going to get worse and we need a ‘firm hand on the tiller’ in the form of Boris Johnson and not silly old ‘spend today’  Ken Livingstone.

Of course, he may have been just softening up all of us to the hard facts of life, namely this crisis is not going to go away and will be with us for years to come. There are so many things that are ‘just not right’ for our global financial problems to be solved overnight. If it were us alone, then Cameron and Osborne’s swinging cuts to the UK budget would have solved our problems in a couple of years, as they had promised. But the situation now means we have to wait for the rest of the world to sort out their problems as well. We are truly in a global economy and every little blip (and especially the big blips) has an impact!

Why didn’t this happen before you may well ask – well it did but it didn’t show. When one of the global players had an ‘imbalance’ (nation or bank) they simply borrowed more money and paid it back when the blip had passed. We were so insulated by this and went on our merry way spending more and more money that we didn’t have. Well, the music has stopped and the hat is being passed round ... unfortunatley nobody is keen to pay the piper.

Those that have money are very reticent about lending – hence the latest inter-bank lending rate (Libor Rate)  is going up. Banks are beginning not to trust each other again: whose balance sheet is ‘shot’? is the latest quiz in the City.

Late last week it was announced that the UK was back in recession – nothing much too worry about as the corrected figures in a couple of month will show we weren’t – what’s -0.2% between friends? What is far more serious is Spain has gone there as well and is fire fighting with cuts to balance the books. With unemployment at 25% (50% for under 25s!) and Spanish banks carrying vast amounts of debt from the housing and property booms of yesteryear – Spain’s plight is deadly serious. If Spain has to be bailed out it is likely to go the way of Greece. In Greece they are at the point of serious social unrest that could explode at anytime!

In Holland and France we have elections and these may herald a change of political direction that could radically affect the global markets and in turn us!

All in all it’s still a big mess and Cameron knows more than he let out at the weekend. As I have been saying for the past three years: this one is here to stay! There is little politicians can do to change things – if consumers don’t consume then there is no growth and this is what is happening throughout Europe at the present time. All governments are in the same boat and so is business.

What can you do about it. Well we are all going to change the way we live and the way we consume. Debt is no longer an option – its cash or nothing. We are going to be smart consumers and smart leisure users – go for the ‘free’, the ‘ two for the price of one’,’ early bird dinners’. You know the sort of thing. We are all going to see our standard of living going down in the next few years. Cash is still King and if you have property in London and the Home Counties you are going to weather the storm.

Watch this edition of the The Andrew Marr Show on BBCiPLayer

If you want to share your views, you can email me via my profile or at tony@olderiswiser.com. Better still; just leave your comments below where everyone else can join in the debate.