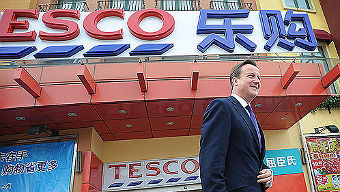 Domestic politics is so passé. David Cameron is off playing international statesman and trying desperately not to mention the appalling human rights record of his hosts (China).

So where is this year’s favorite holiday destination? Well it either India or China – and why is this? Well they’re the places that every president, prime minister, business leader, secretary of state is currently rushing to make new friends.

President Obama is pressing the flesh in India while David Cameron and Vince Cable are ‘popping in’ to Beijing in the way to the G20 in South Korea. Or as one journalist put it:’ It’s a bit like popping into Buckingham Palace or the way to Wimbledon!’.

Why this sudden flurry to visit places anew! Money of course – on each of the leader’s planes are a gaggle of CEOs and MDs from major US and UK companies all out to do new business deals with these sleeping giants.

Big is beautiful – together India and China represent nearly forty percent of the world’s population - 2.6 billion new consumers? If the UK and the US don’t get their share of this burgeoning opportunity we will never see the economic recovery that we want and need during the next ten years.

What is being missed is the new economic and political paradigm that we are watching unfold.  Fifty years ago India was still the colonial backwater that we had just ‘handed back’ with independence in 1947. China was a rabble of a billion peasants led by  ‘communist loony – Mao Tse-Tung’. Both countries were of little or no consequence economically to the West – they didn’t have any money to spend!

Times have changed – today they have economies that we can only dream of – both showing annual growth of 9% - at this rate if it were sustained would give these countries number one and two slots in the world economy stakes by the year 2020! The UK would have been relegated to the ‘also rans’!

The world is changing – no, correction – it has changed and we have to get used to it. The halcyon days of the Raj, The British Empire and even the Commonwealth have gone and the new world order is we have to get out there and sell ourselves if we are to survive.