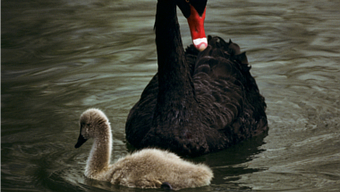 Up the swannee with Natalie Portman

I saw Black Swan this weekend. An excellent film that deserves its plaudits, as do the cast. It's quite a contrast to Aronofsky last film, The Wrestler, which was soaked with a washed out, gritty realism (and painful brilliance).

This, though, is a much more symbolically loaded film and so the real meaning needs more decoding.

Put simply, I don't think Nina dies, or has even stabbed herself. Apart from the improbability of being able to dance while mortally wounded, the blood would have come out much faster and everyone would have noticed. Obviously the film isn't realistic, but that doesn't mean it is badly written.

No, Nina is hallucinating - all that bulimia - while the wound and bleeding are symbolic of the old Nina's passing. She's now IS the black swan, or rather the successful ballerina, and the old oppressed, cowed, frigid Nina dies at the point that the new Nina passes out through lack of food, stress, exertion and perhaps the ecstasy of success.

The moment that convinces me of this is the moment Nina sees her crazed harridan of a mother in the audience. This is highly unlikely - why would an opera let in a hysterical woman with a broken hand without calling for an ambulance? It's also implied that Nina's mother (as played by Barbara Hershey, who deserves more credit) is a shut-in, a warped mess of a woman who tries to remake her daughter in her own image but who can't bear to go out into the world she has rejected.

But the looks on their faces as mother in the audience and daughter on the stage look at each other is revealing. The mother looks distraught - her daughter is about to succeed where she didn't, and her raison d'etre is now gone. So does Nina: She still has love for her mother but knows this is standing in the way of her success and her identity as an adult woman. Nina must be ruthless to succeed, and even love can be a cruel, destructive thing.

So she leaps and falls, landing safely on a mattress. To grow up, we must take risks, jump off the cliff - so to speak - and be what we are, come what may. Point made, Nina's delirium finally knocks her out and she probably spends the night in hospital. Roll credits.

But what Nina wakes up the next morning? I say it is a proud, independent and ever so slightly dangerous black swan.