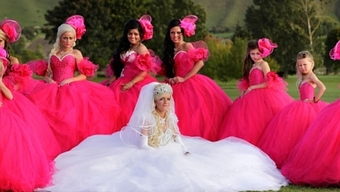 What to make of 'Big Fat Gypsy Weddings' and its first episode on Channel 4, last night?

Well, apart from the fact that 7-year old Margarita's vast, dense, cloud-like communion dress could be used as ballistic armour on most battlefields (the Pashtun elements of the Taliban would probably be jealous), it's plain we're looking at a culture on the edge of oblivion.

Which is to say, it will collapse in on its own contradictions. For all the lewd, scanty clothing and semi-coordinated gyrating of unmarried traveller girls (mere crumbs of freedom compared to the non-stop chaperoning they have to endure), what will do for this community is its lack of education and steely, unyielding dedication to a sort of all-powerful but antiquated matriarchy of the kind that stops Italian and Japanese men marrying.

One might think of 17-year-old soon-to-be bride Josie as a victim, leaving school at 11, looking after the vast clan of siblings her parents have provided her with and then barred from booze and vice until she's finally hitched at a shockingly young age. (Remember, even in the 16th century, many women were at least 21 before they were lead up the aisle.)

But the hard cold look in her eyes suggests more dragon than drudge, to the extent that you rather feel sorry for her new husband, Swanley, an affable, lovable big dray-horse of a young man who nearly misses the wedding and then dresses down at the reception so he and his new wife can throw cake at each other. God help him if he's in five minutes late on a Friday night - still, they seem happy and let's wish them well.

And for all the odd rules and strictures, the families we meet do seem successful, living in regimentally scrubbed and clean houses, and always on hand to cough up small fortunes to indulge their children. There's little rancour and everyone seems content, but it comes at a hefty price - there is little room for anything but tradition here. Your life is set in stone before you can even walk.

The most disturbing element of last night's viewing, though, was the tradition of 'grabbing' - where gypsy boys would try to force kisses out of the girls in a manner more akin to assault than young love. It rather shot down the stress placed on chastity, where the males feel perfectly entitled to act like pigs, while young women fret about their family's honour.

It's this that brings the future of these communities into stark relief. You just can't act like this in 2011, and those who do will find themselves increasingly marginalised. Some travellers may think this is a good thing, but the look on the face of one 'grabbed' girl suggests patience is running out elsewhere. Traveller culture may, in the end, break simply because it can't bend.