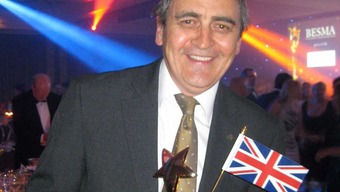 Acclaimed business coach, Andrew Priestley has won a Sales Professional of the Year gold star award at a glittering ceremony at the Lancaster London.

The coveted accolade was bestowed by the British Excellence in Sales and Marketing Awards (BESMA).

BESMA is hosted annually by the Institute of Sales and Marketing Management. ISMM is a prestigious organisation established since 1911 and celebrating its centenary this year.  HRH Prince Phillip is Patron of the Institute.

Mr Priestley, an Australian who has been living and working in London for less than two years, scooped an award from a field of six finalists and hundreds of entrants for sales professionalism and for developing the Sales Profile, an assessment tool used to train sales people.

The judges called it: “A unique and innovative contribution to the sales and marketing industry.”

Mr Priestley’s business, The Coaching Experience was runner up in the category of Under 50 Employees and he was one of only four people in the UK who won a Sales Professional of the Year award. His award was sponsored by the Royal Mail.

The glittering event was held at the luxurious Lancaster London on Hyde Park with over 600 guests on May 26. The hotly contested awards were divided into 13 categories with only two winners in each category.

Prime Minister David Cameron wrote the forward to the programme saying: “The success of British businesses is going to be absolutely vital to our economic recovery, and it is the innovation, enterprise and dynamism of our incredible sales and marketing industry that is going to make this happen."

He commended “the professionalism, creativity and flair” of all the winners.

Mr Priestley, 53, said he was deeply honoured by the award.

“I really value the process of entering awards based around peer review. Just nominating and completing the applications gets you to truly think about the value you are creating in your business.

“Qualifying as a Finalist and attending the interviews is nerve wracking because you are going face-to-face, real time with experienced judges looking at a high calibre of entrants UK wide. So to win a prestigious national award is both a shock and immensely gratifying.”

Mr Priestley has been an executive coach for 12 years, coaching business owners and senior managers in a diverse range of industries including construction, manufacturing, hospitality, transport, engineering, accountancy, legal, agriculture, government and medical.

He prides himself on assisting clients enhance their leadership skills that helps them achieve tangible results in the bottom line with increased profits. He taken the principles of profiling business leaders and applied that to profiling the strengths and weaknesses of sales people.

He has a degree in Industrial and Organisational Psychology from the Queensland University of Technology and a Bachelor of Education from Deakin University in Victoria.

Mr Priestley moved from the Sunshine Coast in Queensland, Australia to West London in July 2009 to further his global career and make a contribution to UK businesses.

Since moving here he has quickly established an A-List clientele of diverse and highly successful business leaders. He is also a sought-after public speaker and trainer.

His wife Diane is a journalist with olderiswiser.com. His adult children also live in London. His son Daniel is a successful entrepreneur and Founding Director of Triumphant Events and popular public speaker worldwide. His daughter Justine is a filmmaker who heads up Really Bright Media.

The whole Priestley family is a success story of Australians who have migrated to the UK to make a difference.

Andrew , congratulations on winning such a prestigious award....so very proud of you and your amazing efforts in all that you do
much love Chris xx

Our Vision as a Christian family-owned and operated Company, is to be the best and most respected Corporation in America generating value for our clients, our partners and our community. We make this possible by offering a wide range of services which improve the lives and well-being of every business owner or client we serve. Business coaching