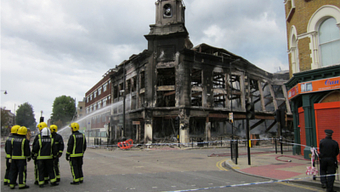 Far from preventing further criminal acts, the mass imprisonment of young offenders in the wake of the August Riots may simply worsen an already bad situation

As the news agenda moves on from the August Riots, what will the long-term aftermath be? It may simply have been a prelude to something far worse. In the government's haste to make an example of the rioters, they may simply have brutalised and alienated them further:

Violent clashes have erupted in London prisons between gang members jailed over the London riots, a Government watchdog said today.

Nick Hardwick, the chief inspector of prisons, said that "serious incidents" have occurred at Brixton and Feltham, where the gym was "trashed", and other jails across Britain...

This entrenches an already existing problem on the one hand, and makes it far worse on the other:

...He also warned that some young rioters entering prison were joining gangs for the first time for self-protection and that new gangs were being formed.

In some cases, Londoners were uniting against rivals from other cities, while in others "postcode affiliations" were changing, as established London gangs recruited members from other parts of the capital...

London's gang problem may be about to get much worse. Indeed, not much thought seems to have gone into dealing with the rioters once they had been put away, with consequences for both them and the society they will one day have to return to:

...Mr Hardwick said that "tensions" between existing inmates and rioters had caused some of the trouble. Other problems occurred when gang rivalries spilled over inside prisons. He also warned that a "significant number" of young rioters jailed for the first time had been placed on suicide watch as they struggled to cope with the shock of incarceration, while others had joined gangs for protection.

"Some young people who previously did not have gang affiliation have joined for self-protection," he said. "New gangs have also been established..."

London faces an even worse gang problem as a result. It's also worth noting that the criminal justice system has hardly stopped existing offenders rioting either:

One in four people charged over the riots in English cities last month had committed more than 10 previous offences, figures show.

Three-quarters of them have a previous caution or conviction, Ministry of Justice figures show.

And more than half of those accused are aged 20 or under...

So, we have a whole generation of young criminals being sent to prison en masse, which hasn't rehabilitated them, won't rehabilitate them and may only make them worse. What could possibly go wrong?