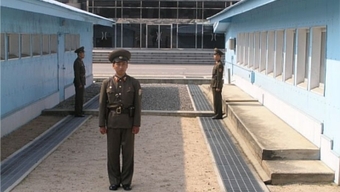 So, as the Koreas kick off for what, hopefully, will end up as a bit of short term skirmishing, what do the press think?

The Guardian is liveblogging the event, with one of its commentators thinking it's time the USA made concessions to bring the NORKs back in from the cold.

Reuters is saying the Americans would much rather the Chinese reigned in their mates in Pyongyang though...

...And The Telegraph is noting that this is the worst attack on a civilian population in Korea since 1987. Ominously, it is also the first artillery strike on South Korean soil since 1953.

Paul Reynolds at the BBC says we shouldn't be too worried about the new North Korean uranium processing plant (yet), but wonders pointedly where they got all their technology from.

In the peninsula itself, South Korea's Korea Herald reports that defence officials are pondering whether now's a good time to allow the stationing of US tactical nuclear weapons there again.

While the official North Korean news agency, the Central News Agency, doesn't report on the incident at all (at the time of writing, 13.14 GMT). It does report that Pyonyang is urging 'the puppet authorities' down south of the 38th parallel to implement previous declarations now rather null and void.