And so we say farewell....Bob Diamond! 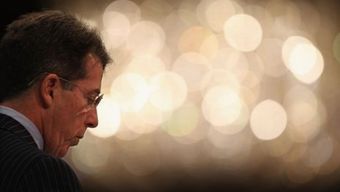 Bod Diamond finally resigns from Barclays over the Libor Scandal.

Nobody who has watched the news lately or read a newspaper will have escaped the Libor Scandal with Barclays Bank having to pay £290million fines for their part in interest rate fixing. The investigation was carried out both in the UK and the USA and proved conclusively that there had been rate fixing going back over a number of years.

Within twenty four hours the Chairman of Barclays announced that ‘The buck stops with me and I intend to resign!’ In less than forty eight hours of that announcement it was announced by Barclays that the Group CEO, Bob Diamond was to resign ‘with immediate effect’ and the Chairman would not stay on full time basis to head the team to find a new CEO.

What a day it must have been at Barclays and to be honest we mere mortals will never know what actually happened. During this crucial forty eight hours the Prime Minister called the crisis at Barclays ‘...a scandal!’; the leader of the opposition, Ed Miliband called on the government to hold a full scale Judicial Review; Ed Balls concurred and said anything else would be a cover up and the Serious Fraud Office announced it would be setting up an investigation to assess any criminal culpability!

Add to this we had roadside interviews with the passing public calling for everything from the sack for the wrong doers to full scale confiscation of assets from those involved – and I suspect this includes Mr Bob Diamonds millions.

So what is all this hoo-ha about – we’ve all known for years that most bankers are crooks and out to make the most money for the bank and for themselves. Most of the scandal around the world’s financial collapse in 2008 can be firmly put at the doorstep of the international banks and particularly those in the USA and the UK. Well even though the dodgy deals perpetrated in the last decade caused most of the problems we face now, the scale of this scandal is quite frankly, beyond belief.

The Libor Interest Rate (London Interbank Offered Rate) is the interest rate that banks lend money to each other during the daytime, overnight and at weekends. It is constantly changing and affects most other interest rates one way or the other. Some mortgages for instance and directly linked to Libor.

The influence Libor has therefore affected trillions upon trillions of pounds worth of transactions as well as other currency transactions around the world. The scale is quite unbelievable and certainly many billions of pounds have been lost and gained by the wrong people. No one is saying all the Libor rates on a daily basis were rigged – just when it suited the bank. At present the investigation has focussed on Barclays but it takes two to tango! Other banks and CEOs will follow the road of Bob Diamond!

For once I’m in total agreement with Ed Miliband and Ed Balls (Wow that’s one for the books! -Editor) there should be a Judicial Review independent of the City; the government; the Prime Minister and the Chancellor of the Exchequer. All of these have vested interests and in many cases secrets to protect! This Inquiry should be held in public just like the Leverson Inquiry into Phone Hacking.

The Judge should tasked with carrying out a total roots and branch examination of the UK banking system; the people running it; the Bank of England and those who choose to influence it. We call this a scandal but it’s not – its corporate corruption and has done this country and its citizens more damage than anything else in financial history and those responsible should be brought before Judge and Jury to pay for their crimes of greed and corporate arrogance! It must never be allowed to happen again.

Will this happen – time will tell but there are a lot of law firms out there putting together law suits for damages by those that have suffered. This is going to run and run for years to come and will even more delay Britain’s economic recovery.