Alan Johnson: Letter to an ex-postman 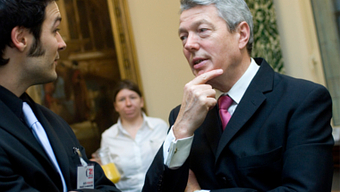 So farewell then, now former Shadow Chancellor Alan Johnson. You could have been a contender, and people sort of liked you, but you made yourself vulnerable by being prone to gaffes. And those rumours did you in good and proper. Also, I couldn't fight off the urge to hum the 'Postman Pat' tune whenever I saw you at the despatch box.

In your place stands a man with 'form' - one Ed Balls. Would it be fair to say this is a bad move? He was too close to the Brown ancien regime, his reputation suggests both treachery and thuggishness and his economic playbook is decidedly pre-budget crunch. He vibes with the unions, but it isn't 1983 anymore, and that sort of thing puts off voters.

So why did Ed Miliband let in a man he'd previously sidelined to the shadow home secretary brief? Suddenly Balls is powerful again - in fact, rumour has it that Balls had a part in your downfall, Alan, and old backstabbing habits die hard. He's too close to the Brownite way of doing things, as is his wife. The Labour party's renaissance in the polls might be under threat.

Still, you've got time on the backbenches now. You're still popular, but you can't do your job via the front page of the tabloids. Never mind. Enjoy the respite. The Blair/Brown wars have left your party scarred, and that means they'll need an Old Labour man with New Labour tendencies on the front benches, sooner or later, just to show some unity with the grassroots.

For now, it's like last year's election didn't happen. But you'll get another chance, Alan. Just remember that there are no friends in your business, just marriages of convenience - and a malevolent, cancerous culture of opportunism.