A Dash To Paris 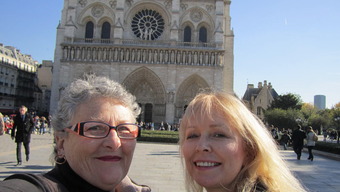 What a thrill to decide to visit Paris and find ourselves cruising on the Seine the next afternoon! We had to pinch ourselves!

Travelling the Eurostar from London to Paris, sister-in-law Christine and I were bracing ourselves for going through the spooky tunnel deep under the English Channel.

Jabbering non-stop as two excited women do, it was a case of ‘This wont hurt, did it!’ After all our trepidation, what an anti-climax!

We didn’t even notice we’d crossed the channel. We thought we were still in London, weaving under ground and over ground as you do on the Tube. But pausing to draw breath, we glanced out the window to notice that the landscape looked suspiciously French and shock upon shock, we were actually in rural France!

It takes just 20 minutes to go through the tunnel and just two and half hours by train to be transported from bustling St Pancras to relaxed Gare Du Nord, little more time than a journey from one side of London to the other.

Instant devotees of Eurostar, we decided the elegant train is the only way to travel! Who would bother with the ordeal of hostile Airport Security and the drama of flying or getting yourself to Dover to brave the ferry when you can glide into gay Pari, smooth and stress-free, fresh as a warm croissant?

We also realised that two women can travel together with ease! Mature-aged gal pals can be agreeable, considerate and co-operative in decision-making; fitting in with each other without fuss! Our little mid-week get-away just flowed.

Arriving on Wednesday afternoon, we jumped the Metro to our hotel. Chris had booked the Hotel La Bourdonnais at a reasonable rate of €180 per night. It was a comfortable, tres chic twin share with Parisian décor on a quiet street within walking distance of the Eiffel Tower. Delightful!

We grabbed a late lunch at a nearby café. I had the strangest warm salad on a tortilla and Chris had a Caesar salad that bore no resemblance to the traditional recipe (Oh well, the French can do what they like with food! Who are we to argue!) But the meal was redeemed by the superb tiny Espresso of utter perfection, strong but not bitter.

"Oh what next?" we mused and decided on a cruise along the Seine. Tickets are just €8 and we could walk to the famous river to join the throng of tourists on board the Brigitte Bardot (as amply endowed as her namesake).  Gliding in awe under a succession of bridges adorned with gold statues, pinching ourselves, with cameras snapping, we were gob smacked to take in the iconic sights of the opulent city we had dreamed about ever since high school French in suburban Melbourne!

You reach a certain stage of life and the world becomes a big, warm cosy home. You feel very comfortable as a Global Citizen, a savvy traveller, connected with humanity, no longer an alien, no longer a child, but a Grown Up with a credit card and a grasp on history and culture and universal human nature. There ain’t nothing you can’t handle, well except the language that is!

It didn’t take long in Paris to experience a creeping sense of inadequacy. Usually supremely confident in my communication skills with the ability to lavish charm on the locals, without fluent French I felt like I suddenly had a disability, empathising with non-English speaking emigrants, intelligent and respected in their homelands, but treated like idiots in their adopted country!

I could decipher French signs just fine, but when it came to uttering a few polite words I was too scared of making a fool of myself with poor pronunciation with the impeccable Parisians with their unforgiving high standards in all things!

But Chris, having honed up on French classes for months before her trip, was confident to try a few phrases on the locals: Bonjour, Je suis Australien, Ca Va? Merci, Pardon, Excusez-moi and the essential survival phrase: “Je suis desole”, exclaimed with exaggerated, high pitched intonation and a theatrical face full of remorse. It is guaranteed to gain pardon for any gauche behaviour such as stomping on a foot in the Metro, spilling your soup down someone’s back or being dumbstruck in giving directions to a lost soul on the street!

Yes two minutes in Paris and I was overwhelmed with the desire to learn the ultimate romance language! After the sunset cruise on the Seine we returned to our hotel room to doll up for dinner. I slipped into my red sweater with the sequinned shoulders and my purple trench coat while Chris opted for her classic black as we ventured forth in search of a cheeky little street cafe.

Lured by the man shucking fresh oysters from their shells, we drifted in and shared a plate of luscious aphrodisiacs (a sheer waste with my husband back in a cold bed in Ealing!) We lingered over the meal, chatting madly and wandered off into the night to see the Eiffel Tower all lit up before collapsing in our jarmies mid-sentence!

The next day we opted for the L Open Tour. I am a big fan of the ever-reliable city tourist bus having done New York, London, Dublin and now Paris from the top of a double-decker, rolling serenely like royalty with a clear view of the sights, the expert commentary booming through your trusty little ear plugs. For just €29 you can be guided around the city for an entire day, with the greatest of ease!

Blessed with sunny blue skies, the chill in the air was bracing and kept us alert! We jumped off at the Louvre and spent two hours wandering the famous art gallery in search of the miniscule Mono Lisa. Despite signs forbidding cameras, the placid guards have long since given up attempting to stop eager visitors taking sly snaps of the priceless works of art!

Next stop was the Notre Dame cathedral and we sat quietly awe-struck in that magnificent, sacred place dating back to the 12th century before succumbing to tummy rumbles and seeking out French cuisine in a nearby café and after some ordinary soup savoured the famed Tarte Tatin, an upside down apple tart, which was delish!

However I wish we had wandered across the road to the Latin Quarter and stumbled into a more exotic café in the funky cobblestone laneways on the edge of St-Michel on the Seine, the bohemian student precinct near Sorbonne University. Ah well! Next time!

Back on board L Open Tour we are captivated by the dramatic Place de la Concorde, formerly the Place de la Revolution, the site where 100,000 aristocrats lost their heads in 1789 when King Louis XVI was overthrown. When Napoleon was crowned Emperor in 1804, he set about transforming the city with splendiferous monuments including the Arc de Triomphe.

But as we chugged along the tree-lined Champ-Elysees, it was the Tour Eiffel on sunset that captured our hearts. When you do the bus tour, be sure to time your tour to arrive at the mesmerising icon in the late afternoon and be prepared to ascend to the top, rug up and wait it out until the sun fades to a golden hue and the whole pristine city lights up!

Chris was determined to make the most of her once-in-a-lifetime visit to the Eiffel Tower and stay on the top of the 320 metre high engineering masterpiece, despite the encroaching chill, the crush of the crowd, sore feet and a parched throat, until one by one the lights came on across Paris.

“Oh look, there’s a light! There’s another one!” she exclaimed with child-like wonder, snapping another view and another view around the 360 degree vista of the magnificent city! We were indeed rewarded for our patience stretching two hours on the summit with a magical view of the twinkling lights of Paris imprinted on our brains forever; a real eye full at the Eiffel!

Too hungry to make it to a café, we grabbed a snack at the tower kiosk and fought off the eager peddlers of tacky souvenirs to make it back to our hotel room for a quiet night in, mulling over the delights of the day.

Checking out on Friday morning, I mustered the courage to mutter ‘Mer-Cee Boo-Koo’ in my best Aussie drawl and detected the exchange of subtle smirks between the sophisticated young desk clerks.

That’s it. I am enrolling in French classes! Comprenez-vous? D’accord!