How four bereaved women came together to provide a big comfort blanket of friendship and support after losing their partners. 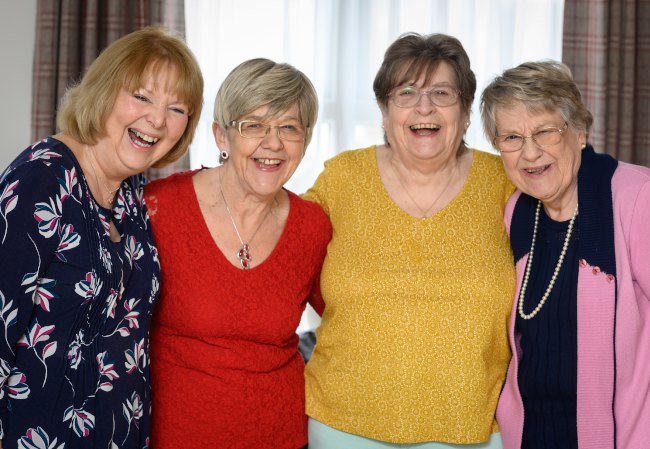 A group of Norfolk women have formed an unexpected sisterhood after losing their husbands.

Despite each having an army of supportive friends and family, widows Jenny Atkin, Jackie Madge, Glenda Davis and Rosemary Fraser say they had never felt more isolated than when their husbands died.

‘Empty chair syndrome’, as Jenny describes it, can make you feel the deepest grief and sadness – even when you are surrounded by dozens of your friends.

Jenny, 76, was tragically widowed when her husband Ray, who had battled cancer and was taking blood thinners to assist his chemotherapy, fell down the stairs. After calling an ambulance to treat him for blood loss, she kissed him good-bye and expected to welcome him home the next day. But he never walked through the front door again.

Jenny, a grandmother-of-four, said: “’Empty chair syndrome is a grief that floods over you when you’re sat opposite an empty seat, or you look at a chair your husband should be sitting in.

“The ironic thing is, it wouldn’t upset me as much at home, but it would happen when I was out with friends who were trying to include me in things after he died. We’d all go out and, naturally, they’d bring their partners, who they’d sit opposite. I would be sat at the end of the table opposite an empty chair.”

She added: “It’s an awful feeling – so much so that it stopped me going out completely. And that only made me more isolated. You become so used to doing things as a pair, you don’t know what to do when you become a one. You miss everything, even little things like the glances you give one another when you’re out and about. You suddenly feel very, very alone.”

Sisters doing it for themselves

After Ray’s death, Jenny was persuaded by old friend Rosemary and her husband (also) Ray, to join them at their local Oddfellows group, based in Dereham. Jenny said, “Rosemary and Ray knocking on the door and taking me along to my first meeting was like a manna from heaven.”

Since joining, Jenny and the friends she met there have formed a ‘millennial girl gang’ which provides them with the love, support and companionship they never knew they needed.

As well as attending regular friendship group events, they shop together, go on holiday together, go out for dinner, and, most importantly – try to sit on round tables, so no one is left on the end opposite an empty chair.

Jenny, who married her husband aged 21, says her group of friends hasn’t filled the void left by her husband, but it has given her an understanding support network she can depend on.

She added: “I didn’t realise how lonely I was until I turned up at my first Oddfellows meeting. It felt like everybody there understood, without saying a word. I left school when I was 16 and once I was married that was it, I wasn’t expected to do anything but be a wife and a mother.

“I’ve spent most of my life being married so it’s even more of a shock suddenly being single.”

Rosemary, 70, and also a grandmother of four, was the first of the four women to join the Oddfellows in 2007 after moving to the area from Essex. Over time her husband Ray became the District Chairman and was a Trustee when he died.

Rosemary is currently the Deputy Chairman of her local District, and will become Chairman on 21 March. She said it was during and after Ray’s illness the friendship group came into its own, helping and supporting her through a very demanding time.

She said: “After Ray died I was a little concerned about going back. I’m a strong, confident person and felt I would be unable to cope with the sympathy. However, I also felt a deep need to return to my ‘second family’, at our local group. Going back wasn’t awkward at all, my friends just came up to me one by one and gave me a hug. Those hugs were worth a thousand words.”

She added: “Talking to people who have been in the same situation doesn’t cure it, but it does make it easier. The group, and the Oddfellows as a Society, is a big part of my support network locally, as my children and grandchildren still live in Essex.”

Glenda, 82 and a great grandmother of six, was married to Michael for 54 years before he died five years ago. They’d originally joined the friendly Society at around the same time as Rosemary and Ray, and like them, saw it as a way to make friends in a new area.

She said: “When you’ve been someone’s wife for a long time, and then you’re not, you lose your confidence. But there’s no point sitting around doing nothing, you have to go out and do something.

“Our group understands what it’s like to be widowed and we give each other the support we need. When I moved house Rosemary and Jenny helped me. On my birthday last week they made a cake and sang happy birthday to me. It’s these small things that really help.”

Jackie, 70, joined the Branch with her husband Colin. They both became heavily involved in the organisation of the Branch, with Colin holding the post of Branch Chairman when he died.

The grandmother of two took a three-year break from the group when Colin passed in May 2014. However, she’s now back after Rosemary and Ray reminded her what she was missing out on.

She said: “Rosemary and I have known each other since school and Colin and Ray had become very good friends – they both had a wicked sense of humour and a cheeky grin. The four of us would go on holiday together.

“After Colin died I said I was never going to leave the house again. I lost all my confidence. Loneliness is a terrible thing, it can eat away at you.

“Rosemary and Ray were very supportive after Colin died. I left the Oddfellows for a time, as it held so many memories for me, which I wasn’t ready to deal with, but we all stayed in touch. Then as I built my confidence, I decided it was time to go back.

“They welcomed me back with open arms. They are my support network and I can rely on them for anything.”

There for each other

“I still come home to an empty house but having this group of friends makes day to day life much more bearable. It’s been a gentle lifesaver, like a big comfort blanket.”

The Oddfellows is the UK’s largest and oldest friendly society and has been connecting people with their communities since 1810. They have more than 314,000 members and 124 local Branches who are helping people across the UK get more out of life – bringing them together to enjoy social events, as well as being there in times of need through the support of care, welfare and financial benefits.