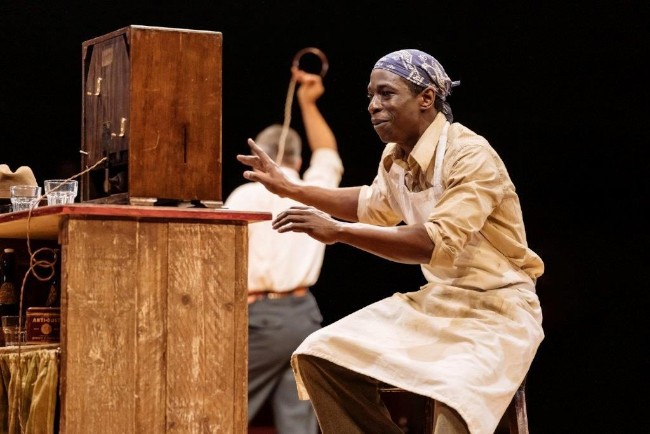 It was a time when fortunes were made and lives broken. In New York City in 1929, the stock market crashed and everything changed.

Arthur Miller's lesser known play The American Clock about hope, idealism and a nation's unwavering faith in capitalism which flopped on Broadway in 1980, has been revived in a new three-hour production, directed by Rachel Chavkin, at the Old Vic Theatre.

In an American society governed by race and class, we meet the Baum family as they navigate the aftermath of an unprecedented financial crisis. There is optimistic patriarch Moe, who's based on Miller's own father, music-loving Rose and their son lee, who wants to be a writer. Peppered with song and dance numbers, the story of their decline following the Wall Street Crash, when they basically lose everything, draws on Miller's own experiences of the Great Depression. When the Baums lose their money, Rose is reduced to selling her jewellery, one piece at a time, and Lee flirts with radical politics. The Baums' disillusionment and in particular the character of Lee--essentially a stand-in for young Arthur--mirrors the country's loss of faith in the American Dream and the effects of this loss on the family against the loss of the larger country.

Miller produces moments of brooding domestic drama and tenderness, but when he reaches beyond the private and strives to be panoramic, he's less successful. The Baums' experiences are interleaved with vignettes of other people's suffering. But the subsidiary characters are sketched in superficially with the result that the production appears fragmented and lacking the necessary dramatic bite. In other words this is a virtually plot-free docu-drama.

In director Rachel Chavkin's interpretation each of the Baums is played by three different actors, to suggest the challenges faced by successive waves of new immigrants. But it is an approach which proves confusing and at times the revolving stage feels cluttered.

But Chavkin's treatment doesn't solve the problem of the play itself which is sprawling and ponderous. You can't argue, though, that its kaleidoscopic vision of a society sleepwalking into self-inflicted disaster has undeniable relevance in our troubled times.