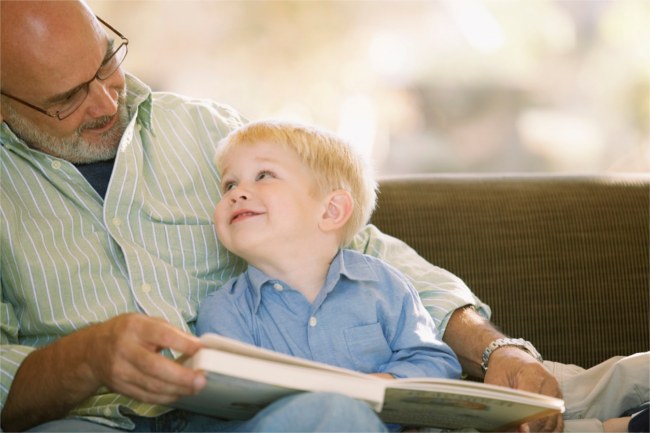 Back in the twentieth century it was naively believed that children were hard-wired for language development. As children throughout the world seem effortlessly to pick-up the grammar of their language Noam Chomsky wrote of a Universal Grammar with children innately possessing a Language Acquisition Device.

But a notable case of social deprivation in 1970s Los Angeles, that of Genie deprived of language stimulus from toddler to teenager, demonstrated that if linguistic stimulus is not supplied in the crucial early years then lost ground is never recovered. Sadly, neglected orphans in Romania's orphanages also provide huge statistical evidence supporting this conclusion.

Do not ignore the importance of the early cooing and babbling stages where babies are experimenting to see what sounds they can produce. Child Directed Speech or motherese, complete with cooing sounds, plays an important role, in encouraging babies and toddlers to try out new sounds.

Usually children enter the telegraphic phase of one or two word utterances such as "me drink" and "Daddy here" between their 18th and 36th months but remember that all children are different.

Children have a natural tendency to want to communicate, and grandparents, frequently the provider of smiles and treats, are fascinating people to interact with. With grandparents, particularly on their own home territory, providing a whole new range of experiences and language, they can provide a major boost to language learning.

Two key concepts to remember come from the Russian theorist Vygotsky: as a More Knowledgeable Other a grandparent manages the conversation and can develop speech. Also there is a Zone of Proximal Development, that's the art of small incremental improvements, focusing on the next step. Keep objectives realistic. Teaching a three year old how to use the past tense is sensible, targeting the future conditional tense will be beyond most children.

You may have a language lesson planned out in your head, a structured scenario of walks, dogs and balls, but remember that until the age of around 5 or 6 children are very egocentric. They will have their own frequently changing agenda. Even with just two or three word utterances they will hijack the conversation taking it in the direction of what interests them: usually cakes, ice-cream, sweets and toys.

Even though your grand-children may struggle to produce certain difficult sounds, so biscuits may have a syllable deleted to become "bissies", persevere with correct pronunciation. Although they may not seem to be listening they will eventually acquire the phonological skills.

Increasingly researchers, such as Tomasello, argue that conceptual understanding precedes language. For instance, once children understand that there are other people in the world eating ice-cream, even though those people are out of sight, they need to develop the language to express that concept.