A national institution is in trouble, not helped by children who don't read, and an ever-more ghettoised comics fandom. How to turn it around? Preferably by buying it 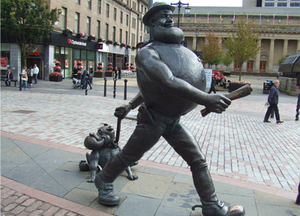 The Dandy isn't looking so Dandy, with its circulation in free-fall. Naturally, this isn't good news as the comic is a national institution and, having been founded in 1937, part of the cultural landscape for many of our readers.

So what went wrong? Looking at the latest copy, very little as it happens. The Dandy has moved with the times and taken lessons from the twin kiddy-friendly comedy colossi of our times, The Simpsons and Viz. (Yes the latter is 'meant' for adults, but don't claim your grandchildren haven't read it a few times. I got my first copy when I was 11 going on 12, which just so happened to also be the issue where Sharon & Tray made their début. The rest, they say, is history.)

As a result, the humour is sardonic, satirical, inventive and - most importantly - able to work on several levels. Even if it is perhaps a little too reliant on celebrity spoofs, it does at least mean the comic is relevant. And if Desperate Dan tumbling down a mountain while lamenting "How odd. My greatest nemesis is a fruit" isn't your idea of comedy, you're probably not British. Kids would enjoy the comedy and so would adults. Why isn't it selling more?

The problem is threefold. Firstly, and as the rise of Cheryl Cole demonstrates, you can make a success out of any old rubbish if you ruthlessly and constantly cross-promote. The Dandy's owners, DC Thompson, don't have the resources to do this, especially for a 74 year old comic that's now selling less than 8000 copies a week. Its stable-mate, The Beano, has never had this problem, being multimedia before the term was invented, with spin-off merchandise, TV shows and a greater presence in the public consciousness.

Going back to The Simpsons, its spin-off comic sells many more copies than The Dandy precisely because it's constantly being promoted on the public stage. Who doesn't watch it? (Though, not for much longer if present backstage intrigues aren't resolved.) As it happens, many more children watch The Simpsons than hear about The Dandy, so guess which comic is more successful?

Secondly, UK children's culture has changed considerably in the past 30 years. Alienated by an increasingly proscriptive education system, it's progressively hard to get boys (The Dandy's natural constituency) to read anything without a lot of sullen passive aggression. The days when your parents or relatives would buy you a comic are no longer with us either.

Children are now more visual and interactive, but less adventurous. And it's we adults' fault for not encouraging our children to enjoy as many different experiences as possible, finding it far easier to let televisions and games consoles look after the kids so we can put the oven chips on.

Thirdly, and most importantly, comics are their own worst enemy. Unlike in Japan or France, comics are still seen as a child's medium in the UK (even though fewer and fewer children are reading them). Worse, the dominant comic culture is American, which serves as a bitter example of when you let the fans (rather than the audience) take over.

As a result, Comics are mind numbingly conservative, alternating between Superheroes (or rather, spandex buffoons and sleazy misogyny in even tighter spandex) or ever more exclusive underground comics that think it's still transgressive to talk about visiting prostitutes and navel gazing angst. Comics have not grown up, but become perpetually adolescent, their main forums not the newsagent but self-indulgent comic conventions reeking of monomania and sweaty geeks who still live with their mothers.

Even 2000 AD (once a comic that both adults and children could appreciate) now exclusively caters for obsessives who know every important date in Judge Dredd's time-line, while the only major comic launch in recent times, CLiNT, is just more of the same teenage gore and raunch, interspersed with added swearing. This marks the near death of comics because they were always meant to be a mass medium, and yet they are catering for an ever smaller, more selective number of people.

So the only answer is that more people should buy The Dandy and support good comics wherever they can be found. That means only you can save The Dandy or better still, introduce it to your younger relatives so they'll buy it too. Or we could just let it die and then wonder where it's gone, which seems to be the British way nowadays. But Desperate Dan deserves better.