Nuremberg - Its Lesson for Today

Tony Kirwood reviews archive footage of the Nuremberg war crimes trial. Available to view for the first time in 64 years it is a film that must be seen and remains as relevant as ever. 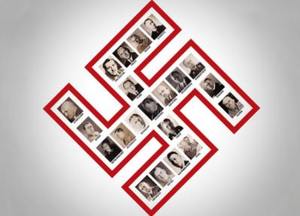 The opening image is of renewal: a woman holds a naked baby as she emerges from a hole in the ground. Next we see streets full of rubble and crowds of distressed and angry people. The narrator asks “How did this happen?” This official film of the Nuremberg Trials tried to give an answer and a sense of hope for the citizens of postwar Europe and for us today.

After being made, it was astonishingly quashed by the US military for viewings outside Germany. This is our first chance to see it for 64 years. Director Stuart Schulberg of the US Signal Corps was only allowed to shoot 25 hours of film throughout the 10 months of the trial. Images from the courtroom are interspersed with newsreel and Nazi propaganda. To add to his difficulties, Shulberg had to dub crucial moments such as Goering’s testimony with the audio record.

None of this takes from the film’s power. The evidence against the 22 defendants was made up entirely from the Nazi’s own records. As chilling as the deeds themselves was the cold-blooded way they were logged.  We see the orders, the diaries and footage of the cynical annexation of Austria and Czechoslovakia, the invasion of Poland, the crimes against civilians and POWs and finally, and devastatingly, the Holocaust against the Jews.

There was criticism at the time that the four charged crimes - conspiracy, crime against the peace, war crime and crime against humanity - had been made up on the spot and that this was a show trial. Watching the film now it is hard to question the meticulousness and fairness of the proceedings. The criminals were convicted from their own evidence.

The final thirty minutes shuts us in the courtroom with the notorious defendants as they give their testimony. What does watching them tell us about Nazi psychology? Most of them – Jodl, Streicher, Rosenberg – sit still and impassive. Goering slumps, looking almost bored. In turn they blame Hitler, each other or “excesses” and “abuses”. They veer between repressed denial and hysteria and remain a mystery.

After the horrors came the verdicts. Twelve were sentenced to hang, seven to lengthy prison terms and three acquitted (but later convicted in German courts). My own sense of hope was revived by the solemn but warm handshakes between the courtroom officials as they stood to leave.

This film should be seen. It’s as relevant as ever.

“Nuremberg: it’s Lesson for Today” is being shown at the Barbican Cinema 1 from June 15 – 21st.