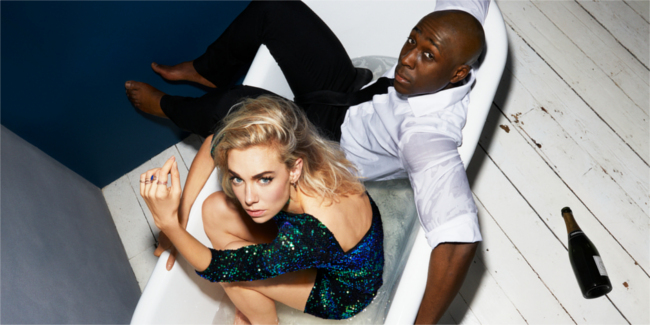 There seems to be a phobia on the part of today’s theatre directors to needlessly update classical dramas as a matter of course but in the process the reworked version loses its power and subtlety. Such a case is Carrie Cracknell’s new production of Julie (NT’s Lyttleton auditorium), adapted by Polly Stenham from August Strindberg’s 1888 tragedy.

This version, which drops the prim “Miss” from its title, locates it in a grand London town house in the present. Wild and newly single, Julie throws a late night party to mark her 33rd birthday, where she is surrounded by people who are only pretending to be her friends. The scenes of decadence and hedonism suggest a world of joyous excess and random explosions of lust. Meanwhile, chauffeur Jean and his Brazilian girlfriend Kristina hover in the kitchen, cleaning up. They’re immigrants full of dreams and ambition, and Jean is not afraid of consuming the best wine from the cellar. Crossing the threshold, Julie initiates a power game with Jean which descends into a savage fight for survival.

Polly Stenham’s new version attempts to augment the sexual abandon with a frisson of racial tension. Yet it’s oddly inert, in part due to a lack of chemistry in the central relationship. There should be all kinds of knife-edged power play going on as the couple engage in a dangerous pas de deux, but for much of the brisk, brief evening the mistress of the house holds her own, while the reluctant object of her desire, Jean, simply merges into the background.

Furthermore, despite displaying a bold take on inequality, racial prejudice, sexual stereotypes and liberal hypocrisy, none of these themes seem to cut much ice and the result is colourless and slight. There may be an intention to provoke but, most importantly, there is no real sense of danger.

The production, however, looks a treat thanks to Tom Scutt’s gloriously sleek set with its endless row of white soft-close cupboards and the fully-exposed concrete, highlighting the contrast between domestic wholesomeness and chaotic decadence.

By turns flirty and growling, Vanessa Kirby capably suggests a vulnerable, impulsive and damaged soul, playing the penalties of privilege and personal trauma (the discovery of her mother’s dead body). Eric Kofi Abrefa, on the other hand, I found rather wooden as the sensible suited chauffeur, Jean, trying to climb the class ladder one minute and a slightly whiny fantasist talking about eloping to Cape Verde with Julie, the next. Thalissa Teixeira makes a dignified Kristina delivering a cooly savage indictment of Julie’s toxic tendency to grab everything she can.

But this production promises more than it fulfils.