Jesus Hopped the A Train

A pumping, pounding play that alternately blazes and freezes its way through the stories of two men incarcerated in the infamous Rikers Island prison. Laurence Green reviews. 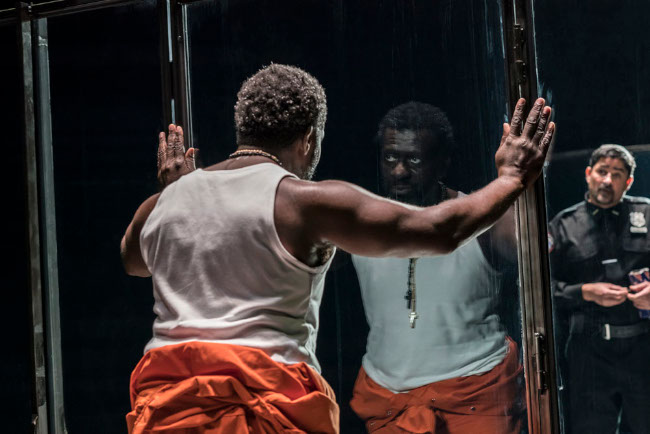 Guilt, faith and redemption are explored in Stephen Adly Guirgis's firecracker of a play Jesus Hopped the 'A' Train, revived in a powerful new production, directed by Kate Hewitt, at the Young Vic Theatre.

Inside the lockdown wing of Rikers Island prison, Angel Cruz, the new guy on the cell block, having shot a cult leader who brainwashed his friend, is confronted with Lucius Jenkins, a charismatic born-again serial killer, who has now found God and expounds his faith with aggressive commitment. The two men exchange heated words and their conversations lead to simmering discussions on crime and punishment and God and morality. What happens, the play asks, when good reasons inspire a bad deed? Or when a bad man might, just possibly have done good?

Around these two men, like moths to a flame, fly Mary Jane Hanrahan, Angel's lawyer, ready to twist the truth to establish her client's innocence, and a sadistic guard Valdez.

This pumping, pounding play alternately blazes and freezes its way through the stories of these two men incarcerated in the infamous New York prison. It suggests that faith can be a source of strength, as with Lucius, or of exploitation, as with Angel's victim, who claimed to be the son of God, while enjoying skiing holidays in Aspen. Hewitt's production imparts a febrile sense of injustice and imbalance, while a cacophony of percussion erupts between the scenes to suggest the perpetual clamour of death row.

In Magda Willi's striking design, the action takes place on a traverse stage that bisects the auditorium, with gliding glass doors conveying a sense of entrapment. Despite the calm minimalism of the glass, there's palpable tension, with the drama ever ready to erupt into passion and violence.

Every performance blazes and freezes in all the right places. American actor Oberon KA Adjepong brings a true visceral intensity and menace to the staring-eyed Lucius, as he does frenzied press-ups in the name of the Lord, while Ukweli Roach brings a blistering, bruising conviction to the role of the tremulous Puerto Rican Angel, mixing savagely defensive swagger with vulnerability. There is fine work, too, from Dervla Kirwan as Mary Jane Hanrahan, the lawyer who turns Angel's case into a personal crusade, and Joplin Sibrain as the disturbed warden who gets a kick out of tormenting the two male prisoners in his charge.

This, then, is a play which implants itself in the memory!

Jesus Jumped the A Train