Is sleep apnoea a risk factor for dementia?

"Sleep apnoea may contribute to dementia by starving the brain of oxygen at night, suggests study," is the headline from The Independent. 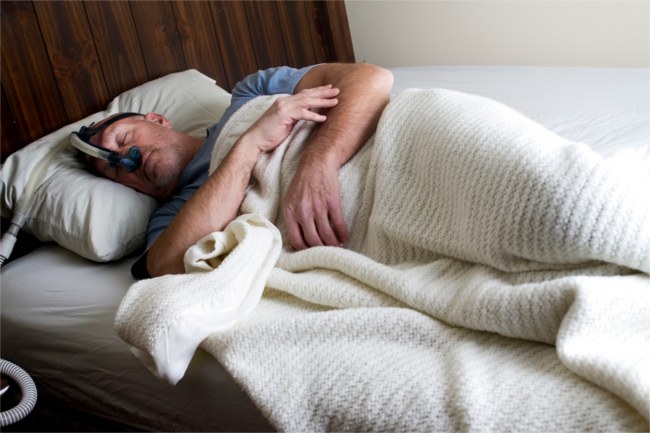 Obstructive sleep apnoea is a condition where people's airways become partially or completely blocked while asleep, which can regularly interrupt breathing and sleep. Symptoms include excessive snoring and daytime tiredness.

In this latest study, researchers in Australia studied 83 adults who were worried about their memory by testing them for signs that made them "at risk" of dementia, such as brain thinning and poor memory test scores. They then observed their sleep and measured blood oxygen levels to look for signs of sleep apnoea.

They found that people who were not breathing properly at night, as indicated by low blood oxygen levels, were more likely to have thinning in some sections of the brain and thickening in others.

However, it's difficult to draw any firm conclusions from this, as it was a very small study that had many limitations.

For example, researchers only took one-off measurements of sleep and memory, and all participants had memory problems, so there was no control group.

Furthermore, no one had a confirmed diagnosis of sleep apnoea, and we don't know if the brain changes were definitely caused by sleep apnoea or what they mean. The participants also had some pre-existing health problems that could have been linked to their memory problems, such as high blood pressure.

Without longer follow-up of the participants, it's impossible to tell whether the cause of memory problems was sleep-related or down to the participants' overall health and genes.

Nevertheless, while the study does not tell us much about any link to dementia, sleep apnoea remains a serious condition – left untreated, it can significantly affect quality of life. It can increase your risk of a range of long-term conditions and, if you drive, increase the chance of being involved in a car accident.

Read more about the diagnosis and treatment of sleep apnoea.

The study was carried out by researchers from the University of Sydney and published in the peer reviewed European Respiratory Journal. No external funding was reported.

The Independent's report was generally accurate, although it failed to point out that the study could not show whether the brain changes were due to sleep apnoea.

This was a cross-sectional study of 83 middle-aged to older adults thought to be at risk of dementia.

Cross-sectional studies can be helpful to understand the incidence or prevalence of a condition or disease in the population but, because they study people at one time point, they cannot tell us anything about cause and effect.

They cannot show that any one factor – in this case, sleep apnoea or low blood oxygen levels – is responsible for causing another, such as brain changes that may indicate dementia. They also cannot rule out potential confounding factors.

A more useful study design would be a cohort study, where people are followed over the course of many years. But these can be very expensive to carry out.

The researchers recruited 83 adults, aged between 51 and 83, from a clinic that researches ageing.

All participants had concerns about their memory and thinking ability or mood and, for the purposes of the study, were labelled as being at risk of dementia. "At risk" was defined as people who were seeking help for brain-related (cognitive) decline.

People were excluded if they:

A medical specialist then physically examined the participants and recorded their medical history and current medication use. Neurological and psychological history were assessed using some well-validated methods, such as the Geriatric Depression Scale.

Participants then had an MRI scan within 4 weeks of their examination and assessment to measure the thickness of various regions of the brain cortex. Thinning of the cortex is often seen in different types of dementia.

To determine whether participants had sleep apnoea, their sleep was observed in a sleep clinic. This involved a specialist sleep physician watching their sleep, assessing sleep patterns, and collecting data on the amount of oxygen each participant breathed in during sleep, total sleep time and how often each participant woke up.

The researchers wanted to see if there was a correlation between oxygen deprivation caused by obstructive sleep apnoea and signs of being "at risk" of dementia, measured by reduced cortical thickness.

The researchers found that participants who experienced low levels of oxygen saturation during their sleep had thinning of the brain cortex in the area involved in hearing, speech and memory.

They were also more likely to have evidence of thickening in an area of the brain called the parietal lobe. Previous research has found similar thickening in people with Alzheimer's disease.

There were also some differences in thickness between structures in the right and left lobes of the brain, although these differences were small.

There were no direct associations between low oxygen and poorer scores on memory tests.

The researchers said this study reveals important insights into how sleep disorders such as obstructive sleep apnoea might affect the brain in older adults.

They said that changes in the grey matter of the brain reveal how obstructive sleep apnoea might contribute to neurological disorders in older adults.

This research does not show that sleep apnoea is a risk factor for dementia. The study design had too many limitations for us to form any firm conclusions. For example:

Furthermore, sleep was only assessed once, in a laboratory setting, so we do not really know much about the person's sleep patterns, and none of the participants had been previously diagnosed with obstructive sleep apnoea. This implies that any suspected cases of sleep apnoea were unlikely to have been severe.

Memory problems have also been found to be linked to high blood pressure, and 43% of the participants in the study were diagnosed with this.

Finally, the study did not assess people for long enough to determine if the memory problems were long term or temporary.

If you're worried about memory loss, visit your GP so you can be referred for a memory test. Similarly, if you have been told you are a loud snorer and feel very tired during the day, see your GP. They may decide you need to be referred to a sleep specialist for further testing.

Sleep apnoea can be treated with a combination of lifestyle changes, such as weight loss, and the use of breathing apparatus during sleep.

Sleep apnoea may contribute to dementia by starving brain of oxygen at night, suggests study


This content is reproduced courtesy of NHS Choices, for more stories like this visit Behind the Headlines.