Superlative two-part epic of ancient Roman intrigues is a magnificent triumph for the RSC and is rightly cheered as one of the theatrical highlights of the year, writes Laurence Green. 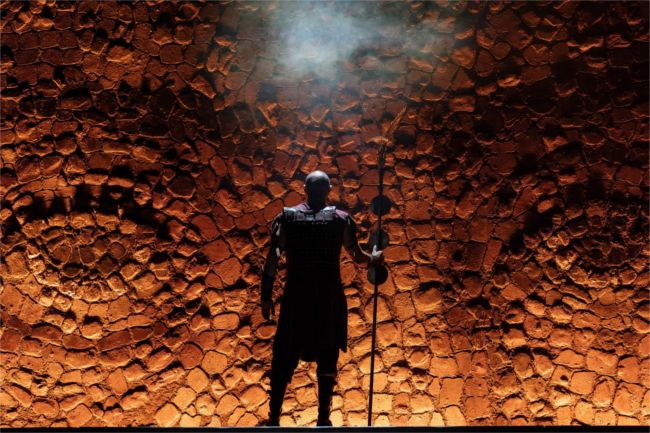 The thrilling world of power politics in ancient Rome is vividly evoked in Michael Poulton’s timely six-hour-plus, two-part stage play adaptation of Robert Harris’s best-selling Cicero trilogy, in this superlative production Imperium, directed by Gregory Doran at the Gielgud Theatre, following a sell-out run at the Swan in Stratford-upon-Avon.

Cicero, the great orator of his age, elected consul by a unanimous vote of the Roman people, devoted all his energy and cunning to preserve the rule of law and defend Rome’s Republic against the predatory attacks of political rivals, discontented aristocrats and would-be military dictators, Imperium follows Cicero’s triumphs and disasters through power struggles, civil wars and personal highs and lows.

Told through the watchful eyes of Cicero’s loyal secretary Tiro, Imperium I: Conspirator reveals how the great orator’s early success unwittingly paves the way for a brutal and bloody end to the Republic. With Rome in chaos at the beginning of Imperium II: Dictator, Cicero battles to restore the power of the Senate from the unruly civic mob and their would-be emperor: one Julius Caesar, who is greedy for power. As law and order break down, whoever controls the mob controls Rome: Cicero, Catiline (his aristocratic rival), Caesar, or the charming but vicious Clodius?

This is a rich and rewarding political drama about a democracy descending into tyranny. Poulton’s adaptation skilfully condenses and clarifies all the complex machinations and power plays, the conspiracies, shifting loyalties and betrayals. In his hands, the intricate, multi-stranded narrative moves fluidly and is never less than engaging. On the debit side though, some jarring modern idioms are introduced and the first part would benefit from some pruning – losing some 20minutes or tighten up the drama and not diminish its impact, the second part, needless to say, is gripping from start to finish.

Despite the fact that the events depicted over the six acts of the play are set more than 1000 years ago, they seem startlingly relevant to the wretched and rancorous political climate of today, in which all parts of the world seem currently ensnared.

Set and costume designer Anthony Ward uses three key items to create the world of Cicero’s forum: a set of plain steps, a mosaic wall which features a pair of watchful eyes, which might be judging people and events or shocked by them, but are definitely observing everything, and a huge globe which is suspended above the stage and onto which various projections can be displayed as a scene demands: blood red to reflect slaughter, golden to reflect power, shattered to reflect broken promises or the state of Rome itself. Added to this, Mark Henderson’s lighting design uses darkness to create mood and he creates wars, orgies, treaties and machinations by clever use of colour and light intensity. 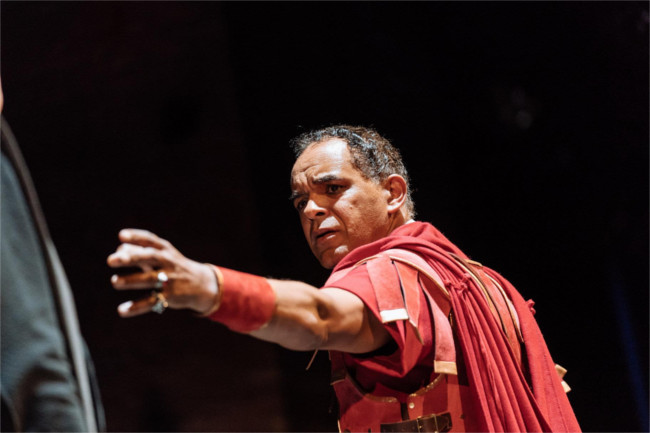 Richard McCabe is outstanding as Cicero, the focus of the drama, allowing us to see Cicero’s virtues, his oratorial skills, his devotion to Rome, his philosophical nature, as well as his weaknesses as never ceasing to remind us how he has triumphed over his humble origins. Joseph Kloska is perfect as Tiro, gentle, subversive and beguiling. Peter De Jersey, meanwhile, excels as Julius Caesar. This is not the noble warrior familiar from Antony and Cleopatra, but a wilder man, more driven by power and lust, a creature who cares not for the people or the country just himself and his divine delusion. Joe Dixon plays two important roles – the deranged patrician Catiline, a seething ball of contemptuous resentment whose thirst for power nearly brings Rome to its knees, and a louche, slightly desperate Mark Antony, all wild eyes and pouting irascibility, while the mercurial malevolent mendacity that Dixon reveals in Antony helps put other characters in sharp perspective, and his Catiline is utterly unrecognisable from his Antony.

The rest of the RSC ensemble acquit themselves excellently, particularly Oliver Johnstone who brings out the watchful danger of the youthful Octavian, Siobhan Redmond, who conveys the hidden steel of Terentia, wife of Tiro, and Michael Grady-Hall as co-consul elect Hirtius and Cato, the conscience of Rome who opposes Cicero’s excesses. Equally impressive is David Nicolle as the haughty Crassus, his face a permanent mask of superiority and arrogance – later as Pansa, he is utterly unrecognisable, completely submerged in the role of the dithering consul-elect.

This, then, is a magnificent triumph for the RSC and certainly one of the theatrical highlights of the year!

Runs until Saturday 8 September at the Gielgud Theatre, London.