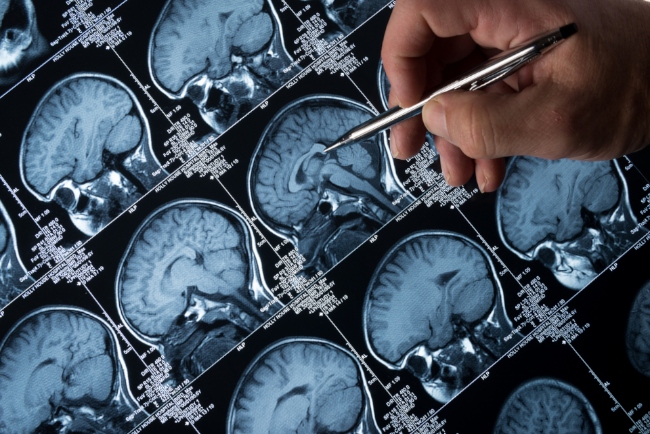 Alzheimer's disease (AD) is characterised by an accumulation of the proteins amyloid beta and tau, which cause plaques and tangles in the brain and seem to affect brain function. Previous trials of drugs to dissolve these protein plaques and tangles have been unsuccessful.

In a new study that prompted the headline, researchers designed a bathing cap-style head device, called the MemorEM, which was used to deliver electromagnetic waves to the brain. The purpose of this was to try to dissolve what are known as oligomers – groups of abnormal proteins – as they were forming.

The study involved 8 people with what was described as mild to moderate AD. The device appeared safe, with no complications and no evidence that it might cause bleeds or tumour development in the brain. There was also sign of improvements on tests of thinking and memory in most of the people taking part in the study. This is an experimental, early-stage study that looked primarily at safety, so it cannot tell us for sure if the treatment works.

While these initial results are interesting for researchers, this treatment is still in the experimental stages. Further study in more people is needed to ensure that it causes no long-term harm and to get a better idea of what impact it could have on clinical outcomes in a wider setting.

Hence we're still some way off from knowing whether this really is a breakthrough in AD treatment.

There is no known guaranteed way to prevent AD, but regular exercise, a healthy diet and avoiding smoking and drinking too much alcohol may help to lower your risk. Find out more about how you can help reduce the risk of Alzheimer's disease.

The study was done by researchers from US company NeuroEM Therapeutics, which designed the device, with others from US companies Left Coast Engineering, Invicro, Ocotillo Electromagnetics, RF Exposure Laboratory and the University Diagnostic Institute, plus University of South Florida in the US and Charles University in the Czech Republic.

NeuroEM Therapeutics funded the study with financial support from Glass Charitable Foundation, Angel Investor Forum and NINDS. It was published in the peer-reviewed Journal of Alzheimer's Disease on an open access basis, so is free to read online.

Mail Online's headline overstates the findings, as this study is unable to tell us whether the MemorEM device can reverse memory loss. However, the story does include commentary from independent experts warning that the trial does not provide enough evidence to prove the device works.

This was an early stage experimental trial. It was open-label, meaning participants and researchers understood the treatment being given, and single-arm, meaning it did not involve a comparison group.

This type of early-stage trial with a very small number of people primarily aims to see whether the treatment appears safe enough to explore further. It can also give an indication of whether it might be effective, but it's not designed to look at this properly. If the results are promising, the treatment can be studied in subsequent trial stages that progressively include more people, include longer follow-up, and start to compare the treatment with placebo, or other treatments, to be sure it really works.

Researchers recruited 8 people aged 63 to 82, with mild to moderate AD through the University of South Florida's Health/Byrd Alzheimer's Institute in 2017 and 2018. Carers and people with AD were recruited together, so the carers could help administer the treatment.

The participants underwent 3 to 4 days of testing, which included brain scans, blood tests and a lumbar puncture to take a sample of cerebrospinal fluid to test for amyloid beta and tau proteins. The participants also underwent several tests of memory, thinking and reasoning, including the ADAS-cog test (Alzheimer's Disease Assessment Scale cognitive subscale), as well tests of daily function.

The treatment consisted of a bathing-cap style cap worn on the head, which contained magnets around the head. A control device worn on the arm switched the device on.

While on, it delivered pulses of electromagnetic waves to the brain.

People were asked to wear the device twice a day (1 hour in the early morning, and 1 hour in the late afternoon), for 2 months. The first treatment was given in the clinic, so the carer could see how it was done. The other treatments were administered by the carer at home.

People were checked after 7, 14, 30 and 60 days for adverse events and to take blood tests. Carers took the blood pressure and temperature of the people in the study every day, to check for any changes related to treatment.

At the end of the 2-month treatment people underwent repeated testing of reasoning and memory abilities, and had repeat brain scans, blood and cerebrospinal fluid tests. The cognitive tests were repeated again 2 weeks after treatment had ended.

There was no reported discomfort from the device and the researchers found no evidence of any adverse effects on people's behaviour or physiological measures such as temperature or blood pressure. There was also no sign of any bleeding or tumour development in the brain.

Results from 7 of the 8 patients showed an average improvement of 4 points or more on the 70-point ADAS-cog test scale. These improvements seemed to be maintained at 2 weeks after treatment. This was a clinically meaningful improvement as the researchers say the average AD patient loses about 4 points on the scale every 12 to 15 months, meaning that a 4-point improvement might put them back to where they were 1 year previously. The patient who did not show an improvement showed a decline of about 4 points.

The patients also showed meaningful improvements on a test of immediate word recall.

The researchers said: "Although these promising results need to be replicated in controlled clinical trials, they suggest that [this treatment] may provide a vertical leap to an entirely new therapeutic intervention against AD."

Headlines promising a treatment that can "reverse memory loss" from AD are exciting, but there have been many such headlines over the years, and as yet no cure. This study suggests another promising area of research, but this treatment is still in the very early development stages.

This trial was useful for its primary purpose – to see whether the treatment appears safe. It seems so, but the study only included 8 people and followed them for a very short period of time. Longer-term study in more people is needed to ensure the treatment is safe and does not cause harm. This might range from psychological (from having to wear a cap that completely covers the head for periods every day) to more serious effects (such as tumour development). Though there were no signs of this, a 2-month assessment period is brief.

Secondly, this study cannot properly assess effectiveness, with so few people and no comparison group. We cannot tell whether the improvements seen were due to the treatment or to other factors. For example, the activity of taking part in the trial and repeatedly being tested may lead to people feeling more engaged, which could boost memory and cognitive ability.

If subsequent trial stages can replicate the results, we will be a better position to see how well the treatment works and what disease or patient characteristics might be linked with improvement. Even in a small group of 8 people, 1 person did not gain any benefit from the treatment, so it seems unlikely that it will work for everyone.

It's also important to note that this treatment is only likely to work for AD, not other forms of dementia such as vascular dementia.

For more information about AD and other types of dementia, see the NHS dementia guide