David Hockney: A Bigger Picture, heralded as the biggest themed exhibition by a living British artist opens at the Royal Academy, London, on Saturday 21 January. 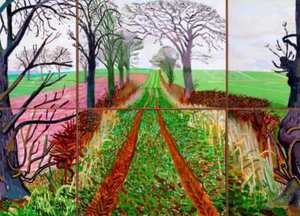 A Bigger Picture focuses on David Hockney's love of landscape, scale and space both in England and abroad. The 150 works on display, illustrate the dynamism and undiminished creativity of an artist who at 75 has re-embraced the countryside of his youth and recast it in a series of gigantic works - many created, pointedly by the artist's own hand in the past five years - Damien Hirst and company take note.

The show is not a triumph by any means. Devoting the whole of the RA to one artist and one theme wrings the very life out of many of the hanging works. However, the great outdoors has provided Hockney with a seemingly endless seam of creative inspiration over the course of his career and there are notable works that cast a welcome shadow over the less worthy offerings.

The show begins positively enough with some of the artist's earliest painted studies of east Yorkshire (1956); works which show an austerity and bleakness that many sons and daughters of the North will identify with.

They are tight, focused and wonderfully skilful with every mark having purpose. These early paintings mark the importance of atmosphere and appreciation of space that have come to epitomise Hockney's work. They are complemented by collage and paintings from his life in America including Rocky Mountains and Tired Indians, A Closer Grand Canyon and Pear Blossom Highway – works that illustrate the progression of his thinking. 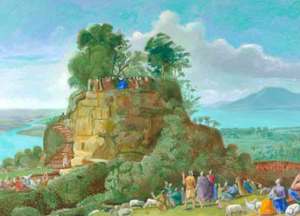 Since committing to this exhibition in 2007, Hockney's intense observation of his surroundings has culminated in the production of distinct groups of new works - which seem to have been created specifically with these galleries in mind.

In the first group, a series of paintings inspired by Claude Lorrain's The Sermon on the Mount (1656) builds from a life-size transcription to the ugly 30-panel, A Bigger Message, which while impressive in scale is all crude brushwork and loose use of colour. It suffers in comparison to the intensity of nearby sketches: simple charcoal on paper that are immediate and direct and suffer none of the laboured strokes of their near neighbour. 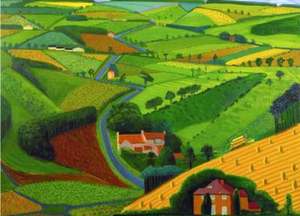 The second series brings forward a patchwork vista of landscapes from Lincolnshire and Yorkshire, including a warming representation of Salt's Mill at Saltaire and A Road Accross the Wolds (left). Hockney attributes the momentum for much of his recent 'Yorkshire' works down to the illness and death of his friend Jonathan Silver. The journeys he made across the county's seasonal landscapes from his mother's house to visit him in Weatherby reacquainted him with the landscape of his youth.

Though, championed by the Royal Academy, as an exhibition of Hockney's landscape work, it is in the final series of works set in and around Woldgate woods, that the true theme of mortality and renewal becomes clear. In successive sequences of paintings, Hockney studies light and space as spring's renewal leads into life-affirming summer, through the autumnal fall, until we reach the inevitable end in winter.

Each of the six panel pieces feature the same trees in Woldgate (below) and Thixendale woods at different times of the year through 2006 and 2008. Some work, some do not. However, as a collection, no matter what sequence they are viewed in, they are a soothing reminder of life's journey and regeneration.

Devoting an entire room to the hawthorn blossom series is the low points of the show - a bombardment of exaggerated brush stokes and colour. "He has learned accurately to anticipate the arrival of hawthorn blossom in spring and to recognise its early signs of growth. He refers to the period as Action Week, indicating his mindfulness that spring, unlike winter and summer, is short-lived and must be painted with some urgency. He rises early to paint nature in all her wild exuberance … (the blossom) is as if a thick white cream had been poured over everything … just an intense visual pleasure," states the accompanying waffle, but no explanation can justify the inclusion of so many ordinary paintings. 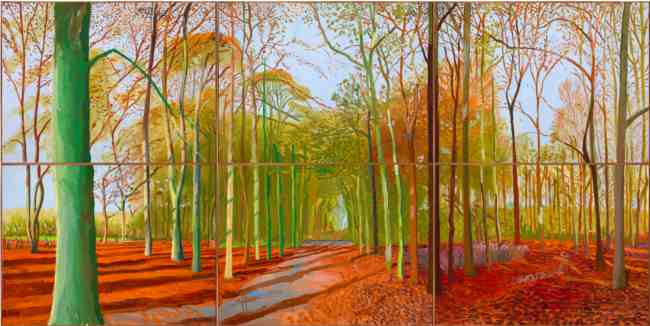 The show steers disconcertingly close to the mundane at times, with crowded walls that are reminiscent of the worst excesses of the Summer Show. However, it is re-energised with several genuine jaw droppers and like last year's Leonardo Da Vinci show, the Royal Academy is bracing itself more bumper attendances.

Without doubt, Hockney's painting will divide many; his use of colour and bold brush strokes in works such as Winter Timber revisits Fauvism, leaving many critics to ask, why?

Why not? Hockney is a fine draughtsman, a man who adopts and champions new media in art - as his video installation and iPad works testify. It is this willingness to experiment and develop a path that sees him borrowing from the palettes of Derain, Rouault and Rousseau and take inspiration from a movement that was active at the dawn of the 20th century. The results are rich and dramatic, offering the viewer a choice of alternate routes through the paintings.

Winter Timber (above) is one of a series of dynamic yet similar pieces including Felled Trees on Woldgate 2008 and More Felled Trees on Woldgate 2008. Though, undoubtedly, the show’s centrepiece is a series of 51 iPad sketches and the monumental The Arrival of Spring in Woldgate, East Yorkshire in 2011 (twenty eleven) (below). The immense, immersive tangle of colour hints at something more beyond and invites the viewer to acknowledge the bigger picture, the world beyond the minutiae of daily life or even our own mortality. Maybe this, more than nature, is what occupies the thoughts of the former enfant terrible of British Pop Art.

We have created a group where larger images from the show can be viewed join David Hockney - A  Bigger Picture to view.