Can doing a daily crossword or Sudoku puzzle keep your brain young?

"Older adults who regularly do Sudoku or crosswords have sharper brains that are 10 years younger," reports the Mail Online. 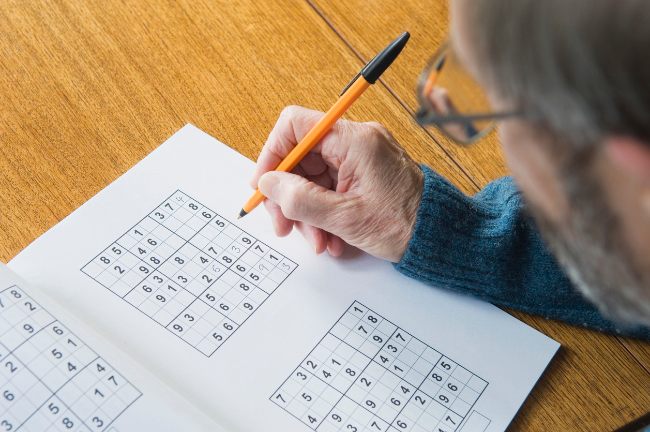 In 2 linked studies, researchers asked people aged 50 to 93 to fill in online surveys, which included questions about whether they regularly did number puzzles (like Sudoku) or word puzzles (such as crosswords).

People also did online tests designed to test their thinking and memory (known as cognitive abilities).

The researchers found that people who said they did puzzles regularly did better on the tests of cognitive ability. The researchers are quoted in the Daily Telegraph saying this suggests that regularly doing word and number puzzles helps keep our brains working better for longer.

It could be that people who have better cognitive abilities are more likely to do number or word puzzles in the first place.

They were published in the peer-reviewed journal Geriatric Psychiatry.

The Mail Online and the Telegraph were enthusiastic about the studies, and did not point out that they provide only a snapshot of one point in time – so we cannot tell whether doing puzzles might lead to better cognitive function later on, or the other way around.

Both media reports use phrases around years of "delay [in] brain ageing". These figures did not appear in the published research papers so it was not possible to critique these results. They seem to have come from a press release from the researchers.

This was a cross-sectional survey, completed by volunteers online. It is part of an ongoing research study called PROTECT, which is looking at how the brain and cognitive abilities change with age, and how certain factors such as lifestyle are linked to this.

The study will follow the volunteers up for at least 10 years, but the results published today come from their first assessment.

Cross-sectional assessments like this can show what people are doing and test their abilities at one point in time. They cannot show us how one factor, such as doing puzzles, might affect another, such as cognitive function.

People logged on to the study website and answered a series of questions about their lifestyle, including how often they did word puzzles or number puzzles.

The volunteers then took a series of tests designed to show how good their level of cognitive function was across a range of areas including memory, speed of thinking, reasoning, processing information, decision making and ability to concentrate.

Of those who took part, 19,078 people answered the questions about puzzles and did at least one of the tests.

The researchers separated out the results for word puzzles and number puzzles and reported them in 2 separate publications. The cognitive tests they used were:

Researchers looked at how people did on the tests, based on how often they said they did puzzles:

Researchers adjusted their results to take account of other factors that could skew the results including people's age, gender, education level and how often they took the test (people were asked to take tests up to 3 times over 7 days, and sometimes doing a test more often means you improve).

The researchers said of the number puzzle results: "These findings have contributed to the growing body of literature that supports the case for regular use of activities that challenge the brain in order to promote cognitive stability in ageing."

They point out in the research publication that because the study was cross-sectional that the results "do not represent evidence that number puzzle use alone has caused the superior cognitive function", and that studies following people up over time are needed.

We often use the phrase "use it or lose it" about the brain.

Previous studies have linked keeping mentally sharp in older age to things like education, career and keeping mentally active. While mental activity itself is not likely to prevent dementia-causing diseases such as Alzheimer’s disease, doctors think it may help build up a "cognitive reserve", meaning that people retain their abilities for longer, even if they do get a disease such as Alzheimer’s.

However, we do not have much evidence about which activities work to keep the brain functioning as we age. Crosswords, Sudoku puzzles and "brain training" websites have all been investigated, but the evidence so far is not strong.

The ongoing PROTECT study may provide more insight as it progresses, but the cross-sectional data available at this stage is limited in what it can tell us. For example, we don't know if someone enjoyed doing puzzles because they had high levels of cognitive functioning, or if their cognitive functioning got better after they started doing puzzles.

There are other things we need to bear in mind about the study. The results about how often people did puzzles were all self-reported, so rely on people being accurate. We also don't know how long they'd been doing puzzles, and whether how often they did them had changed.

Also, people who responded to the survey were self-selecting, so they might have been more likely to be puzzle fans than the general population.

We do not know from this study whether puzzles help to protect your memory and brain power.

Older adults who regularly do Sudoku have sharper brains that are 10 years younger, finds study

Wesnes KA, Brooker H, Ballard C, et al. An online investigation of the relationship between the frequency of word puzzle use and cognitive function in a large sample of older adultsInternational Journal of Geriatric Psychiatry Published online November 15 2018