An absorbing, thought-provoking movie, set in post-war Leningrad, that seems like a strong contender for Best Foreign Film at the forthcoming Oscars. Laurence Green reviews. 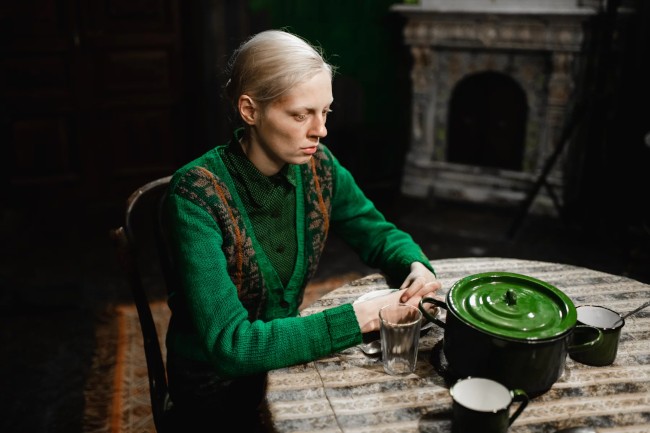 In Leningrad in 1946 survivors of the terrible two year siege are adapting to peace. Nurse Iya (Viktoria Miroshnichenko), nicknamed Beanpole, is subject to occasional fits that leave her 'frozen' for minutes. She is devoted to her fragile boy Pashka, but he dies in a terrible accident, after which Masha (Vasilisa Perelygina), a female soldier with whom Iya is clearly besotted, comes back into her life. Masha is Pashka's real mother and she now insists that since she is no longer capable of bearing a child, Iya, who finds men repulsive, must have a child on her behalf. The relationship between the two women becomes even more complex by circumstance and by the nasty streak Masha has been left with by her appalling experience at the front.

The film was inspired by Nobel prizewinner Svetlana Alexievich's The Unwomanly Face of War, based on interviews with ordinary women about their wartime experience. This is a movie where love and loss and hope and disappointment seemingly go hand in hand. The characters' desire to assert their identity and the desire to have a child is portrayed with a raw psychological intensity that is reminiscent of Ingmar Bergman. The post-war siege atmosphere of Leningrad is vividly conveyed, while  Sergey Ivanov's realistic period setting and Ksenia Sereda's cinematography provides a powerfully expressive context, all aided by first-rate performances by the two female leads. Often deeply disturbing, Balagov's film conveys a fiercely imaginative approach to the trauma and exhaustion of a society emerging from war.

An absorbing, thought-provoking movie, then, that seems like a strong contender for Best Foreign Film at the forthcoming Oscars.